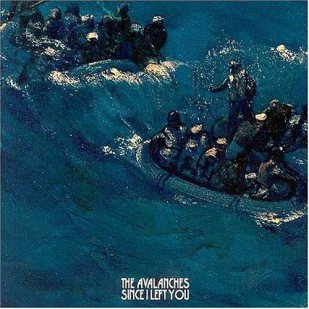 Taking advantage of a theme free and underpopulated evening I chose, as the deadline was looming, the 1 hour and 39 seconds of aural bliss that is, it turns out, The Avalanches first (as opposed to only) album, Since I Left You.

Released in 2000, for me no other album signified the coming of the new millennium quite as effectively. Bright, busy, supremely optimistic and breathtakingly well conceived, Since I Left You seemed, at the time, to mark a new dawning, a fresh way of doing things. Surely the shape of things to come! Taking our lead from the album cover, we waited, with baited breath, for the tidal wave of copyists; the magpies, the hoarders, the new collagists, imitating the mother lode but, inevitably, never improving on it. But they never really came, sunk without trace!? So we waited for the Avalanches themselves; to follow up their gargantuan first effort…and we waited, and waited, and waited! Internet rumours came and went, as they tend to do, but the offerings were piecemeal; the odd song here and there, guest artists occasionally letting slip that they had been allowed in to have a play but still nothing. And then, just as we were giving up, Wildflower was released and finally, Since I Left You had a sibling…sixteen years on! What does it sound like? I don’t know because, I’ve never heard it! I haven’t felt enticed because, and I guess this might be partly why we waited so long, Since I Left You is as close to damn it to perfection that I really don’t feel I need anything else like it.

I realised, as I was considering writing this blog entry, that Since I Left You is probably the only album I own which I really, really love yet know practically nothing about. After all, I can only recall the names of two of the songs, and can’t really hum, or even remember anything other than the occasional musical motif, a whiff here and there, the tiniest of shards, gleaming yet gone in a flash. Since I Left You (the song) and Frontier Psychiatrist are so anomalous (in that they are recognisable as songs in their own right) from to their bedfellows that even though they are both awesome pieces of music, you do end up wondering whether they belong with the rest of the stuff on the album. Because, if they weren’t there, Since I Left You would play out a bit like a dance orientated, poppy version of one of those albums we’ve had at record club every so often (The Necks and William Basinski spring to mind) where the music twists and turns and morphs and mutates over time, shape shifting imperceptibly yet definitely. But, in contrast to the minimalism on show in these other cases, the movements here are from one beautiful groove to the next, gradually and seamlessly blissing out as the end of the trip looms into view. I own the vinyl version of the album and the only breaks in the musical theme (apart from the aforementioned singles) are the end of the sides…I almost wish I owned this in some digital format instead, just so that that continuity could be preserved!

I don’t listen to Since I left You all that often but, whenever I do, it feels like a real treat. As for Wildflower, I am pleased for the Avalanches that they have managed to move back towards, if not into, the zeitgeist but I can’t help feeling that there is something inherently cool about those rare cases in popular music where a band comes along, releases a single classic album and then buggers off never to be seen again. For sixteen years The Avalanches were one of those bands; now they just seem a little bit more ‘regular’ than their fantastic debut album would suggest.