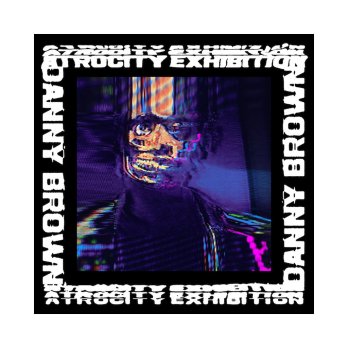 I don’t follow hip-hop closely. In fact, so intermittent is our relationship that I’m pausing now to check whether I’m sure hip-hop is still the preferred tag. I love it, but we just don’t see each other very often. (Come to think of it, I don’t follow any music closely, do I?).

One of the plus points of this infrequent contact arrangement is that when we do see each other, maybe once or twice a year, the music has almost always changed, mutated and spun off in some unpredictable direction. Add to this that when you’re dipping in, then you tend to go first for the most acclaimed artists and records, hopefully a short-cut to the cream of the crop, and it all adds up to me having my socks blown off most times I actually sit down with hip-hop albums.

This, and a fulsome appreciation, grown steadily over the 30 years since I first heard ‘Rebel Without A Pause’, for hip-hop’s sense of sonic adventure, the detail, the ambition and the sheer amount of work and that goes into producing a record as dense and packed as most of these albums puts almost all other musicians to shame.

In 2015, having been wowed by both ‘To Pimp a Butterfly’ and Vince Staples’ exceptional ‘Summertime ’06’ I considered making 2016 a hip-hop only year. I didn’t last too long but in the midst of exposure to Future and Young Thug, the glorious return of A Tribe Called Quest and a joyful mixtape from Chance The Rapper, the record that stood out, that pounced from the pack and got its steel hooks into me, was Danny Brown’s thrilling, disorienting ‘Atrocity Exhibition’.

From the opening ‘Downward Spiral’ this is a different proposition from any album you’ve heard before. A warping guitar chord is crudely overridden by Brown’s unhinged Wile E Coyote psycho-babble. “I’m sweating like I’m in a rave/ Been in this room for three days/ Think I’m hearing voices/ Paranoid and think I’m seeing ghost-es/ Oh shit”. The guitars bend and bow around him, the voice grating like an ice cold fever. The tone is set for a descent down one man’s personal brain drain.

The second track, ”Tell Me What I Don’t Know’ is more straightforward but no less stretching, the verite tale of kids dropping out of school to sell drugs, and the death and destruction that follow. This counterpoint to the opener, and the space that opens up between them, offers a potent expression of the function of contemporary hip hop. Here is an artist seeing a nightmarish real world as a trap from which the only viable escape is into psychedelic hyper-reality, via drugs and sex and into an imagination rotten with wormholes.

As if the paranoia, dislocation, drained cold possibilities aren’t explicit enough, then Brown also begins to makes good on the album title by drawing out clinical descriptions of debauchery that would have JG Ballard nodding in admiration whilst referencing Joy Division, who had their own ‘Atrocity Exhibition’ in more than one place. “This is the way N****, step inside” he snaps and shoves on ‘Golddust’, whilst ‘Rolling Stone’ rocks and shivers to a bassline that could have been lifted straight from a Martin Hannett production.

The soundscapes elsewhere are just as stunned and stunning, from the contrapuntal hammering of ‘Pneumonia’ to the pounding of ‘Aint It Funny’, hitting you like stepping through a street door into a club, and immediately realising you’ve made a big mistake.

The album, although not long, is way too dense and detailed to take in on one pass. It’s smothering, stunning, dislocating and intoxicating in all the right ways, and takes you to places that you are unlikely to have been before.