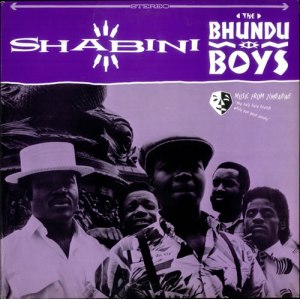 Shabini is yet another album rescued from the nether regions of my collection by the strange alchemy of Devon Record Club and its uncanny ability to push me to places I haven’t visited (or, indeed, felt like visiting) for literally decades. The Bhundu Boys’ debut album was a favourite of mine for a while back in the late 80s but for some reason, that seems all the more baffling to me now that I have become reacquainted with it,  I stopped selecting it. For me, albums that get left on the shelf are usually the ones that I either:

c) one of those albums I’ve listened to too much and feel I have nothing left to unearth.

As the third option is the only one that could possibly apply to Shabini, it’s curious just how differently I hear it now in comparison to all those years ago – I obviously had never come close to working it out first time around. As a teenager, the vocals and those trademark chiming and ultra nimble guitar lines were pretty much the whole package as far as I was concerned. Coming back to the album 25 years on, the (frankly incredible) bass playing and wonderfully inventive and subtle drum work are what really stands out. It’s a breathtaking sound – warm and fun, exciting and enticing, its joyousness all the more poignant bearing in mind what has happened in Zimbabwe between the record’s release and now.

The Bhundu Boys were the African music supergroup of their time. Championed by the ultimate arbiters of musical taste on British radio, John Peel and Andy Kershaw (Kershaw even went on to be lead singer Biggie Tembo’s best man), they quickly gained a reputation for being a blistering live act and acquired a fan base that extended way beyond the norm for a group that sung songs in their native language and only used those frets that are located in the body of the guitar! But the Bhundu Boys were charming, energetic, committed and charismatic…and the music, known as jit, was instantly likeable and great to dance to.

The songs on Shabini are consistently brilliant – there’s no filler here – and, although on a first listen they may all sound a little similar what with all those chiming guitars, with familiarity individual songs begin to reveal themselves – Manhenga is dark and brooding (and is possibly my favourite track on the album), Pachedu and Shabini are both songs that segue (without a sniff of a key change, I might add) from a sedate initial section into a manic latter half, Hatisitose has a hypnotic staccato guitar line operating underneath and in tandem with the more recognisable guitar work and on Wenhamo Haaneti the Boys seem to have borrowed Roky Erikson’s electric jug. The playing throughout is breathtaking. There are no weak links here, seemingly no egos, just perfect teamwork and great compositions.

The Bhundu Boys went on to implode under the weight of their own popularity. They started to sing in English. They appropriated western production values and sounds into their songs. They opened for Madonna. They were dropped by WEA. Tragically, three of the original members of the band died of AIDs in the 90s and Biggie Tembo was found hanged in a psychiatric hospital in 1995. So now, perhaps, it is impossible to listen to Shabini in the same way as in its time of release and maybe that is partly why, these days, I am drawn as much to the darker rhythms of the record as to those playful melodies, sweet harmonies and skittish guitars.

Nick listened: I knew the name Bhundu Boys in a very distant way, but I don’t think I’d ever consciously heard them. I’ve got various little bits of African music – King Sunny Ade, Toumani Diabate, Ali Farka Toure, Fela Kuti, an Ethiopiques compilation, Tinariwen, Antibalas – but it’s a very tokenistic gesture if I’m honest. I’ve enjoyed it all when I’ve listened to it, but I seldom feel the urge to pull it off the shelves.

Likewise I really enjoyed Shabini, especially, as Tom notes, the bass playing and drumming. In fact, the bass playing in particular served to make me angry with contemporary Western bands for their general eschewing of decent bass playing; many bands seem content to let their least-musical mate play bass guitar, treat it as nothing but a dull, semi-rhythmic thrum, and then mix the resultant paucity of quality so low that you can’t hear or feel it anyway. More bassists should be raving egotists like Paul McCartney or the guy from Os Mutantes, driving the songwriting and production of the music to show off their chops.

I could totally see myself tracking down Shabini if I hadn’t just bought a new house and thus plunged myself once again into penury.

Rob listened: Strange to reflect on how The Bhundu Boys reached parts of the UK listening public that their compatriots before and after couldn’t get to. Cause then to reflect on the extraordinary influence that John Peel had on the music we listened to in the 1980s. ‘Shabini’ still sounds energetic, alive and sparkling with life and apparently effortless technique. Lacking the cultural context must surely affect the way we hear a record like this, but hearing it as abstract music, its extremely sweet.

Graham listened:  Another blast from the past for me as I’m sure I danced along to the The Bhundi Boys at a GLC concert on the South Bank, coutesy of good ol’ Red Ken. Interesting to catch up with the history (albeit tragic) of the band after all these years. I’ve never owned anything like this, purely because I haven’t really explored and listened enough. For all the reasons listed by others, I really enjoyed listening to this.

One thought on “The Bhundu Boys – Shabini: Round 27 – Tom’s Selection”