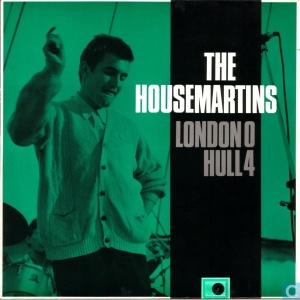 I’ve come back to the Housemartins a couple of times in the last year or so. First time around I went to their second record, ‘The People Who Grinned Themselves To Death’. My recollection was of this as their tightest collection, shot through with stiletto-sharp pop songs and heart-rending ballads. I was right about the latter at least.

Most recently, partly meandering around trying to find something to bring to record club, I played ‘London 0 Hull 4’ properly for the first time in more years than I would care to remember. I was shocked by how vital it felt, how strangely contemporary it sounded, its exquisite references worn lightly but stylishly, and by how current and critical its subject-matter unmistakeably is.

I liked it plenty at the time, and it meant something to me, but coming to it now I feel as if I hear a much more resonant, better album than back then. Back then, 1986 to be precise, I was young. The Housemartins were seen as a step sideways from The Smiths, a band they never truly resembled in any way other than as the only other indie guitar group to make significant showings in the charts in the mid-80s. At the time this music seemed more straightforward, easier to understand, use and pigeonhole than that being produced by Morrissey, Marr and their muckers. No difficult things, like messy teenage feelings, being dredged up to deal with here. The Housemartins were making simple, mostly fast-ish, music about things like being unhappy about the Queen, or wars, or going to the pub. Those things were easy to understand. Painless. Nothing to worry about.

I can remember what it was like to be a confused teenager. Perhaps you can too. One of the reasons I can remember so clearly is that The Smiths skewered the feelings of isolation and unloveability. They are pinned to my heart. But now, listening to The Smiths, much as I still love them, sounds like looking back at a past version of myself preserved in a glass tank. I know I was that person, but I’m not any more. The Housemartin’s however never carried an emotional punch for me. I loved lots of their songs, but that was all. It’s a shock then to discover that now, almost 30 years later, this is suddenly music that sounds raw, current, meaningful, challenging and relevant.

Paul, or P.d. as he styled himself back then, Heaton  declared that he hated writing love songs and found writing political lyrics easier. They inscribed their debut album with the phrase Take Jesus – Take Marx – Take Hope and ‘London 0 Hull 4’ is an evangelical album, preaching against the scourge of poverty and inequality of all sorts. Back then I had zero perspective on most of the things Heaton was singing about. I knew ‘Happy Hour’ wasn’t a straightforwardly happy song, but couldn’t square that with the way it was taken to the hearts and dancefloors of the nation. I thought ‘Flag Day’ was pretty much about him not liking the sale of commemorative poppies, which confused me a bit and briefly made me wonder whether I should be against that too. I’m pretty sure I thought ‘Sheep’ was about sheep.

Now this record and those songs stand clear as hard edged, punches un-pulled, social and political polemics, as sharp in observation and blunt in impact as anything Minor Threat ever wrote.

‘Flag Day’: “So you thought you wanted to change the world? Decided to stage a jumble sale. For the poor. For the poor. It’s a waste of time, if you know what they mean, try shaking your box in front of the Queen, because her purse is full and bursting at the seems.”

‘Get Up Off Our Knees’: “Famines will be famines, banquets will be banquets / Some spend winter in a palace, some spend it in blankets / Don’t wag your fingers at them and turn to walk away / Don’t shoot someone tomorrow that you can shoot today”.

‘Think For A Minute’: “‘Cause nothing I could say could ever make them see the light / Now apathy is happy that it won without a fight”

And how about that jaunty hit single? The one with the fun-tastic stop-motion video everyone was twisting along to back in 86?: “It’s another night out with the boss / Following in footsteps overgrown with moss / And he tells me that women grow on trees / And if you catch them right they will land upon their knees”

Just to ensure I’ve made my point, I’ll be blunt too. ‘London 0 Hull 4’ has a message that feels at least as sharp, important and vital today as it was back then. If you happened to be a dopey teenager when you first heard it, then it will mean much more to you in austerity Britain, as disabled people die months after being told they are fit to work, refugees fleeing western bombs are crushed under trains as they flee towards their liberators and the basic safety net for the most vulnerable people in our society is slashed and torn while those responsible for our economic cataclysm continue to get richer.

More importantly, ‘London 0 Hull 4’ also sounds hugely different to the record I internalised all those years ago. I recall an acoustic, jaunty jangle, somewhere on the axis between psychobilly and C86. In my defence, I had listened to barely anything back then. My reference points were few. Cut me a break, okay?

Revisiting now it’s clear that The Housemartins were a completely different outfit altogether. They reach back to hard-driving Northern soul and were closer to Dexy’s Midnight Runners than any of their supposed indie contemporaries. They were also richly informed by gospel, both in its multi-part harmonies and its sense of music as a force for social and spiritual change. Ultimately this music is closer to Sam Cooke or Aretha Franklin than to Talulah Gosh or the Chesterfields.

Their songs are buoyed along by Norman Cooke’s bouncing bass and propelled by Hugh Whitaker’s biting drums, topped off with sparkling guitar and Paul Heaton’s still angelic voice. I wasn’t ready for it at the time but, heard now, this is an astonishing debut record from an outfit who self-deprecatingly styled themselves “the fourth best band in Hull”. Nonetheless, they were mature enough to show full commitment to their vision right across the album, and confident enough in their sound to step back and pen swelling protest anthems like ‘Flag Day’ and ‘Lean On Me’.

They followed the album with their only number one single, ‘Caravan Of Love’, which I include here for similar reasons. I loved it at the time, when it’s a cappella delivery seemed a dazzling technical novelty. I got a my first proper record player for Christmas 1986 and I played this record over and over and over. Heard again years later it’s simply a beautiful piece of music, arranged and performed exquisitely, resonant with meaning and history. It’s a brave band that take on the Isley Brothers. With ‘Caravan of Love’ The Housemartins significantly surpass them.

It also informs further reflection on the album that preceded it. ‘Caravan’ was far from a novelty. In fact the band used to perform a cappella sets as the ‘Fish City Five’, even supporting themselves on occasion. ‘London 0 Hull 4’ is full of gorgeous, vocal harmonising, another clear line from the band’s origins and inspirations.

I’ve been thinking about bringing this, or it’s follow-up ‘The People Who Grinned Themselves to Death’, to record club for a long time, on the basis that I doubt the others know them all that well and they have some good tunes. One of the reasons Record Club is so meaningful, for me at least, is that it forces a deep immersion in the music you choose to present. The effect here has been pronounced, turning a record I liked a lot almost 30 years ago into a record I absolutely love and revere and can’t stop playing right now in 2015.

Nick listened: This album was brilliant – wonderful, even – but “Caravan of Love” – which I remember well but haven’t heard in probably 25 years – was exceptional. Rob’s cost me a tenner by playing this because I need to go and get a ‘best of’ now. Fabulous choice.

Graham listened: Didn’t see this coming and didn’t at all expect what I got from it. Always had the Housemartins pigeon-holed as smiley happy people not to be taken at all seriously. At release I was far too busy scrabbling around with more heavy/serious/sometimes awful bands to go any deeper in to this band, other than to recognise some catchy singles. Always perplexed by Caravan of Love and wondering where that fitted with them. An amazing track, but it was by the Housemartins? Anyway, tonight the music and the story was a thoroughly enjoyable education.

Tom listened: I’m sorry to rain on your parade Rob, but I just couldn’t get past Paul Heaton’s voice – I guess he’s kind of the equivalent for me of what Samuel T Herring was to you, before you saw that footage of him on that TV show.

Although back in the day I never really fell for The Housemartins, I remember liking them well enough and I was particularly fond of bopping around to Me And The Farmer at school discos and the like.  It was what was to come next – The Beautiful South – that tarnished my view of The Housemartins for, what would now seem to be, forever.

I find it odd that I have such an adverse reaction to Heaton’s vocals as they are, on the face of it, pretty innocuous. Obviously the others at record club don’t share my misgivings either but we all have our blind spots I suppose and this is one of mine.