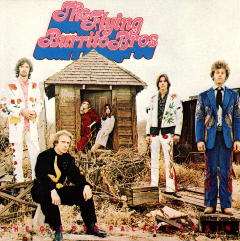 Firstly, I should come clean. The Byrds have never quite done it for me. Capable of veering from the absolutely sublime to worse than ridiculous in the space of a couple of seconds, they released a slew of almost, but not quite, great albums in the mid to late 60s, somehow managing to remain vital (to a point) despite multiple line up changes and alterations to their sound. Listen to All I Really Want To Do followed by Chestnut Mare if you don’t believe me – barely the same band…and it sounds like it! Which one you prefer is largely down to whether you prefer jangle pop or country and western inflected rock music. If you’re Nick the answer should be neither but I suspect the superior quality of early Byrds’ jangle pop is just sufficient to ensure that the former track avoids the broad brush he is keen to apply to both genres.

As with many bands, somewhere along the road something magical occured and with the Byrds most people seem to particularly revere their last two psychedelic albums – Younger Than Yesterday and The Notorius Byrds Brothers. They both contain more than their fair share of magnificence. But, by the same token, they both contain at least one drastic misjudgement of taste that leaves me wishing for a digital version of the album – they would definitely benefit from having some of those 60s excesses trimmed off the edges (Mind Gardens and Space Odyssey – I’m looking at you!). And how could they have passed Lady Friend by – a pearl of a track that only saw light of day as a single. They really were a little crazy back in the 60s!

For me, however, the zenith of Byrds related output (having never managed to acquire any of Gene Clark’s admired solo output admittedly) is the first Flying Burrito Brothers album – the Gilded Palace of Sin. Only loosely connected to The Byrds (late comer Gram Parsons and original member Chris Hillman comprise half the band), The Gilded Palace of Sin takes up where Parson’s sole Byrds album, Sweetheart of the Rodeo, left off. But where as Sweetheart is a more or less faithful set of mainly country and western standards, The Gilded Palace of Sin sounds more confident and more aware of what it is trying to achieve – an attempt to fuse the psychedelic sounds of prime time Byrds with the earthiness of more traditional American country folk music.

You don’t have to listen long to hear examples of this. First track, Christine’s Tune, storms along in a blur of nimble bass playing and pedal steel. However, the guitar break that follows is something else, rich in reverb it wails its way through the remainder of the song – although this is ostensibly an album that looks back to american roots music for its inspiration, there is enough that’s different to suggest that this would become the blueprint for a new approach to making music, a coming together of old and new in a way (although Nick will contest this point) that might not have been done before. Certainly, I know of no song that predates Christine’s Tune (or Wheels or Hot Burrito #2 for that matter) that mixes old and new so obviously and, arguably, so effectively.

But whether you like The Gilded Palace of Sin or not depends largely on how you feel about Country and Western – this is not a rock album with a bit of pedal steel over the top, this is a collection that digs deep into the great American songbook, an album that at the time of its release pointed the way to the future by looking way back in the past.

Rob listened: Tom’s right to point out the placement of this record in the development of some of the dominant strains of western music since the early 70s. I’m in no position to pronounce on it, but it feels right to say that there was little or no music before this time that had blended traditional American folk and the great American songbook which had dominated the preceding half century, with the heady possibilities opened up by the then raw and recent rift created by pop and rock. The trick now is to hear this as a startling departure, rather than simply an antecedent of the 40 years of pop and country which followed. Some trick if you can pull it off. My advice is don’t bother, it’s impossible.

Instead spend time with some great songs and feel the commitment and confidence of the young men who were shaping them from the raw earth around them. Sure there are hackneyed things on here, but time will do that. There’s still lots of stuff that sounds pretty fine to my ears.

Graham listened: I have a huge hang up with anything with more than a hint of C&W that means I struggle to take the listening seriously in case I should decide its ok to go and do the shopping in Asda wearing a Stetson and cowboy boots. If I overlay the Osmond analysis as a tool to explain http://www.youtube.com/watch?v=_AfXznngjGw Tom is able to lean towards Marie, whereas I’m more comfortable with Donny. Not that I didn’t enjoy the listen, its just a genre I wouldn’t reach for myself.

Nick listened: I quite like The Byrds, but the stuff I like is the psychedelic and jangly pop material they produced circa 65-67. As soon as the spectre of Country reared its head, I switched off, and I certainly didn’t investigate when some members of The Byrds pursued those avenues further. I have no fascination with the American midwest, I don’t like Westerns as a genre of film, and I don’t like Country as a genre of music; I could try and analyse why but to be honest I’m not that interested in doing so – I just instinctively disliked both since I was a kid. This was alright, as an example of something I don’t like!