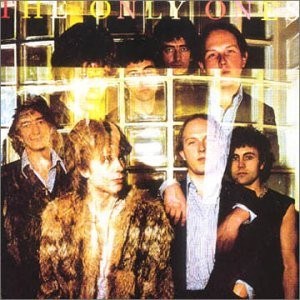 During my first year at university I became infatuated by what I knew at the time as (but now am not so sure) the debut album by The House of Love…the one with Christine on it rather than the one with Shine On on it. Whatever, for a while (until the disappointing 2nd/3rd album was released) I, perhaps unwisely in some respects, hung on every word Guy Chadwick offered and I couldn’t help but notice his obsession with Peter Perrett and his band The Only Ones. It seemed that pretty much every issue of Melody Maker had some reference to The Only Ones by Chadwick and before long my record store browsing priorities had shifted from ‘H’ to ‘O’. Eventually I found myself a copy of The Only Ones’ final album, Baby’s Got A Gun and, although I need to remind myself of it in light of my recent full conversion to the first two albums, my initial impression was that it wasn’t very good…at all. So I stopped looking for Only Ones albums and moved onto something else – to be honest, I had probably given up on The House of Love by then as well.

But, as is so often the case, I chanced upon The Only Ones first two albums when they weren’t on my radar, bought them (thinking that at the very least I would now have a copy of Another Girl, Another Planet) and then played them for while, enjoying them well enough but still not really falling under their spell. I dug out the debut a few months back thinking it could be interesting DRC fodder, gave it a cursory listen and dismissed it as not good enough. However, a second (crucially?) LOUD listen brought it to life and since then I have listened to little else, alternating between The Only Ones and Even Serpents Shine both in terms of what’s on the turntable and in terms of which one I prefer.

Having given it much more thought than is necessary (or healthy) I have come to the conclusion (in contrast to most internet blogs I have seen) that there is nothing to choose between these two fine, scuzzy, exciting and spontaneous sounding records. After all, internet preferences seem to split the vote between those who favour the punkier immediacy of the debut or the more consistent uniformity of the sophomore offering. For me, they’re both great records and, the deeper I delve, the closer I get to seeing what Chadwick was on about all those years ago. Fabulous song-writing, excellent musicianship, messy production and over all, Perrett’s whiny, note imperfect and definitely acquired taste of a voice. I love Perrett’s guts to have a go with such limited vocal chords (although, after all, many of the biggest names in rock’s pantheon – Dylan, Reed, Young, Cohen – could hardly hold a tune) but I have a feeling there are those (I include Nick in this list) for whom his voice will prove too difficult to see past. It really is their loss as, by (proper and loud) listen three or four, you will not even notice those flat and warbled tones as you anticipate the complexities of what is coming next, reveling in the fine melodies on offer and wonderful interactions of the band.

The Only Ones kicks off with a red herring. The Whole of The Law is as gentle a song as Perrett ever wrote and, sweet and melodious as it is in its own right, it doubles up as the ideal appetite whetter for what comes next – only the best intro in modern music bar none! Another Girl, Another Planet is a true classic but to my mind the intro is so good that the rest of the song doesn’t quite compete and I enjoy the other punk rockers on the album (City of Fun, Language Problem, The Immortal Story) just as much. Interspersed between these energy fueled anthems to doomed youth are longer, brooding exercises such as Breaking Down and The Beast, in which Perrett’s voice is really put through its paces. He just about holds onto those long notes as if heroically highlighting his own shortcomings and laying himself bare just as much through his singing as through his lyrics. Either Perrett had very little self-awareness, supreme and mis-placed self-confidence or (most likely) wanted to really challenge himself and play to his weaknesses as his voice on these tracks is far less conventionally effective than on the faster numbers, if no less affecting.

So whilst The Only Ones may well be an acquired taste (and Even Serpents Shine perhaps even more so – the songs twist and turn more unpredictably even though the singing is stronger), with the benefit of volume, openness of mind and an acceptance of that voice, you will be able to welcome another couple of classics into your home, classics that will keep on smouldering away, giving pleasure long after the latest flavour of the month has burnt itself out.

Nick listened: Tom’s right, of course, that PP’s voice is… rubbish. To be frank. But, I reckon I could get used to it, because musically this record was great – intricate, tuneful, exciting, varied, and great fun. I was aware of the name The Only Ones, and Another Girl, Another Planet, but knew nothing of the context at all. A really good choice.

Rob listened: The Fall are my favourite band. Perrett sounded like Pavarotti as far as i’m concerned, so no problems there. No real problems at all, in fact. Having only known ‘Another Girl…’ previously, this was a real surprise, rich and deep where I had expected scratchy surface. For a band who could, and in the minds of millions may well, have stopped after just one track, The Only Ones certainly seem to have taken their chance to make something much more substantial then your average one hit wonders.