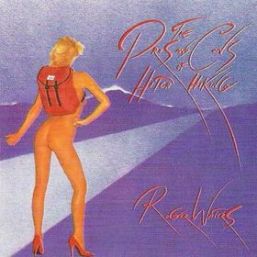 Unfortunately being sandwiched in between Sunn O))) and Scott Walker was always going to be a challenge too far, even for a country rock concept album based around a real time nightmare between 4.30 and 5.11am. Even the themes of mid-life crisis, older men lusting after younger women, retreating to eco-living and the final collapse of all relationships seemed relatively jolly in comparison.

This album came out in 1984 at the end of my love affair with Pink Floyd and after the harrowing nature of the Final Cut one might have expected Roger to have lightened up a bit? Not!

The lyrics and imagery that accompany this album are so bizarre and pompous I’ve always imagined that irony was heavy at work here. After another listen I’m not quite so sure. What still attracts me to this album is some of the almost comedic transitions between songs (cue the German beer festival and the puppy sandwich). Strange thing about this album is a lot of people have probably heard good chunks of the instrumental pieces without realising. Someone at BBC drama/documentary is obviously a fan as scenes that require desolate/deserted sound imagery are often accompanied by extracts from this album. I’m no great fan of Eric Clapton but I do like what he did on this album. Supposedly this was his first sober/clean recording for 10-15 years and his country/slide playing very different from anything else that I have heard him do (not that I have heard much).

Still, the battle was lost in between my two fellow members choices!

Nick listened: You know what? This might have been the most unsettling record of the night, for me at least. And for many reasons. Partly because of my complete antipathy towards Pink Floyd, who I revisit once ever couple of years in an attempt to “get” Meddle or Wish You Were Here, but who I just find to be the cheesy, predictable, platonic-essence of “serious rock” every time. Partly because of the weird, linear-yet-dreamlike structure, which eschews refrains and repetition in favour of perpetual, yet still, somehow, predictable development – the whiff of prog, if not the instrumentation. Partly because it’s scary that there was ever a time when it was OK for a major rock star to release a concept solo album based on a dream about picking up young girls by the side of the road. Partly because of the lyrics writ throughout said record, which attempt to express said concept from multiple, fractious, dream perspectives, using only one actual voice (and thus adding to the confusion). But mostly, probably, for the sound, which just has that rich, opulent, 1970s into 1980s expensive studio rock record sheen, something perfectionist and dehumanising; real instruments that sound as if they’re played by ghosts or invisible machines or computer programs rather than by real fingers and real hands and real people. There’s something very antiseptic and unsettling about it; the polar opposite to Scott Walker or Sunn o))), and with a different effect – it doesn’t explicitly oppress you, or lull you in and physically shock you, but it does, slowly, cumulatively, insidiously, make you feel just a little bit wrong.

Tom Listened: They say you shouldn’t judge a book by its cover, but they should have added that the rule doesn’t apply to Roger Water’s albums. I agree with all Nick has written about The Pros and Cons of Hitch-hiking. I have always had a deep, possibly disproportionate, dislike of Pink Floyd and as I could hear them throughout this album I was always going to struggle with it.