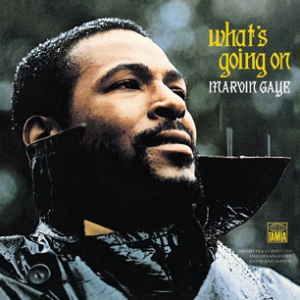 When I set us the theme of ‘turning points’ a fortnight or so ago I didn’t have a specific record in mind; or, indeed, a specific interpretation. A ‘turning point’ record could be a fulcrum of an artist’s career, a dramatic change in your personal relationship with music, a shift in the way an entire genre works, or anything else we could gerrymander an explanation for. It seemed like the kind of vague idea that could make for an interesting evening’s listening…

But when I actually started thinking about it I wasn’t feeling inspired. So I threw the idea out on Twitter to see what bounced back; someone mentioned this and a lightbulb went on in my head. It’s the most obvious turning point album there is, on several levels: Marvin’s seizing of creative control from Berry Gordy was an entirely new thing for Motown and for him (though not, quite, for soul music as a whole; Isaac Hayes’ Hot Buttered Soul pre-dates it by about 18 months); it set the scene for Stevie Wonder’s amazing string of 70s solo albums (as well as quite a few other people); it established the idea that a soul album by a big-name player could be something other than a collection of singles and cover versions; and, for me, it was a seismic marker in my teenage musical development – the first soul album I bought, and a gateway into entire worlds of r&b and jazz that I’d barely been aware of outside of oldies radio beforehand.

As a 16-year-old I was a bit baffled by What’s Going On at first; I’d read a huge amount about it, about how it was legendary and amazing and significant, Ian Brown from The Stone Roses claiming it was the greatest album ever made, how it was soulful and serious, dealing with the Vietnam war and ecological catastrophe and economic meltdown. So I was expecting big things, as you would. Given what I knew about soul music back then, which wasn’t much beyond recognising all those classic Stax and Motown singles, I expected What’s Going On to be a string of undeniably great soul bangers, hit after hit after hit.

But actually, it’s something else entirely; the entire 35 minutes is a single piece, almost, the first side flowing through six songs which are more like segues or sections than discrete units, the second side a sandwich of two amazing grooves and a piece of subtly devout gospel. The opening two numbers, for instance, are essentially the same; the title track and its near-twin are separated by little but their lyrics. “Save The Children” and “God Is Love” are hymn-like calls to God, enough to make an atheist teenager feel hypocritical and uncomfortable just by listening in. “Mercy Mercy Me (The Ecology)” and the title track were about the only two I recognised; the rest seemed formless, almost, strings and rhythm section and brass weaving through what seemed like improvisations (and which, I learned over the years, often were).

It took me some time to adjust my expectations and come to understand this record, but it wasn’t a difficult thing to do; not with music this amazing. Nearly 20 years on, I’d definitely claim What’s Going On as one of the greatest records ever made.

Tom Listened: Of course What’s Going On has been on ‘The List Of Albums I really Should Own But Don’t’ for years now and hearing it in full for the first time at Nick’s house has moved it way on up said list. I wouldn’t say I came close to working it out in a solitary listen and just as Nick has suggested in his write-up, it confounded my expectations (much more so than Innervisions which sounded more-or-less exactly as I had imagined it would beforehand) but I have been listening to records for long enough now to be able to tell the difference between discombobulatingly (is that a word?) good and discombobulatingly bad and this most definitely was the former.

A joy to listen to…as are most offerings at Record Club!

Interestingly (well I found it interesting anyway) I just noticed for the first time the lack of question mark in the album’s title.  Always assumed it was there. That changes things!

Rob listened: I too was baffled by ‘What’s Going On’ when I bought it in the mid-90s. It’s still a swirling, beguiling record, never quite what i’m expecting, always hiding something, always giving something different away. It still sounds like an amazing achievement. 40 years after its release I struggle to think of any other albums so compact yet fully-realised, so self-justifying as ‘What’s Going On’.

Graham listened:  Never heard this before and what a far cry from what I expected. Nick doesn’t credit himself enough for simply being a “bit baffled” by this as a 16year old. At my age it had me completely baffled by side 2. Having recently watched Platoon, I was happily groovin’ in the R&R bunker scene vibe as soon as the album began, but was not expecting the complete mixture of social and political commentary/religion/spirituality/jamming/gospel  that followed. Far too much to take in on a single listen.