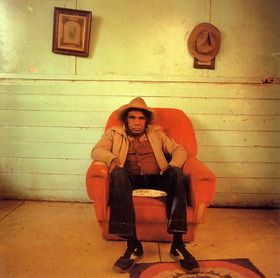 Buffalo Tom were the grunge era’s nearly men; seemingly always on the verge of breaking through into the big time but destined to be forever looking on from the sidelines (like the everymen they so blatantly were) whilst the demi-gods – Cobain, Vedder, Dando, Corgan – strutted their charismatic stuff through the pages of NME, Melody Maker, Rolling Stone and Spin and on to the day glow X-factor hit machine of its time that was MTV. I love the band photo of Buffalo Tom on the back of Let Me Come Over – Bill, Chris and the eponymous Tom sat around an anonymous table in some anonymous diner, looking slightly apprehensive yet vaguely excited like three young Dads about to go and see their children in their first Xmas panto. It’s a brilliantly mundane photo of a brilliantly ordinary band (that’s not meant to sound pejorative at all) and it wholeheartedly captures the reason why I like them so much…and why they could never mix it with the big boys – they were just three great blokes singing great songs without an iota of pretense or showmanship.

And that’s why, of all the records I immersed myself in the Spring of 1992 (one of the key turning points in my life) this is the one with the greatest power to evoke personal (rather than scene based) nostalgia. You see, when I listen to Nevermind or Blue Lines or Slanted & Enchanted all records that, in their own way, broke a mould and set a new agenda, and all records that I love or have loved, I do get a sense of nostalgia but they don’t take me back to myself, sat in my bedroom in my parents’ house counting the days before I would leave to go on my trip of a lifetime to Australia. No. I am reminded of Grunge and Trip-Hop and Lo-Fi and the music scene in general at the start of the 90s. These records are so connected to what came next, so steeped in the scene they spawned that, for me, the memories they evoke are forever blurred, tarnished even, so that I can’t even tell whether those memories are true or illusionary. But seeing as it was one of the most exciting times of my life, full to overflowing with the thrill of anticipation, it’s great to head back to those feelings every now and again…and that’s where Let Me Come Over comes in.

Buffalo Tom existed in a vacuum really. They had no angle, no ‘USP’ as Nick puts it. They just wrote really good songs…well, I liked them anyway! Admittedly some of their work was patchy and, for me, their five albums go: good, not so good, great, not so good, good. But I may be wrong as I haven’t listened to albums 1, 2 or 4 for some time now (and there are a few other albums but I don’t know them). But I am pretty sure that album number 3, Let Me Come Over, is the one where the stars aligned and there can be but a few albums of straight ahead US alterna-rock with a hint of grunginess that set the bar so consistently high through 12 tracks. There are no weak links here, no filler, no mis-steps and revisiting Let Me Come Over is like spending time with a long-lost, very dear and completely trustworthy friend. There’s no danger, no unpredictable mood swings or ghosts in the closet, just warmth, pathos and 12 sweet melodies – from the noisy opener of Staple to the noisier closer Saving Grace, through moments of calm (Frozen Lake), poignancy (Mineral, Porchlight) to anthemic sing-alongs like Taillights Fade and the unimpeachable Larry – that make me feel good about life. And what’s wrong with that?

Rob listened: I loved Buffalo Tom and I fully endorse Tom’s assessment of their place just below and to the right of the pantheon. Although a couple of their songs, ‘Sunflower Suit’ and ‘Crawl’, had as much impact one me and held the same addictive pull on me as anything Nirvana or Pixies ever released, it seems broadly fine for them to stand as workmen. The work they did was great and they made me very happy by doing it. ‘Birdbrain’ probably has more resonance for me, soundtracking the Summer between my first and second year at university, but it was great to hear ‘Let Me Come Over’ again after so many years. It may be off in the distance now, but its taillights have yet to completely fade.

Nick listened: My brother, who’s about the same age as Rob and Tom, professes to only like 3-minute-power-punk-pop. I have noticed that he has a Buffalo Tom album or albums on his shelves. Which is not surprising. Despite being aware of them for ever, seemingly, I’ve never actually listened to them knowingly. As such, I’ve got none of the attachment to them that Rob, Tom, and presumably my brother might do. This was very pleasantly workmanlike, as it were, but I definitely got the sense that it lacked that certain je ne sais quoi or creativity or charisma or insanity that the likes of Nirvana or Smashing Pumpkins had which made them explode out of the scenes from which they emerged. But Buffalo Tom don’t seem to be all that bothered about not exploding, which is fair enough.

Graham listened: Another band I always knew were there and deserved investigation, but never got around to it. I thought this was really great and after borrowing the album and listening to some others, I would agree it sounds their best. Strangely it sounds as if the ‘…Tom’s did it for Tom, in the same ways the Screaming Trees, did it for me around the same time. As no-one is  still reading this far down a review, its probably safe to reveal I currently don’t, and have never have owned, Nevermind. Phew, think I got away with it!