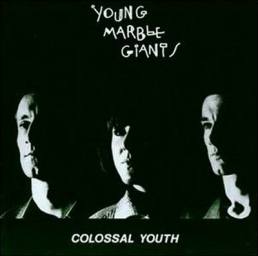 As a ‘no theme’ evening, I had no idea at all what records Rob, Graham and Nick would be bringing. As it turned out, my offering couldn’t have provided a greater contrast to theirs. But then, Colossal Youth offers a stark contrast to pretty much everything else in recorded music – though it may have been an influential album, its sound has never (to my knowledge) been replicated and, now that we live in very different times and produce records in very different ways, I guess it is unlikely ever to be. Colossal Youth is certainly not one of those ‘timeless classics’. It was made in 1980 and it sounds like a record that couldn’t have been made at any other point in time. It’s all hushed tones, intimate, yet strangely dispassionate vocals, chopped guitar notes, cheap ‘n nasty organ sounds and the occasional, relatively frantic (as in a snail in fifth gear), bass run. When listed, it sounds as there there might be quite a lot going on. There’s not! I described Colossal Youth at the meeting as one of the most ‘undense’ records ever. I stand by that. Though sonically very different, I am minded to reference Nick Drake’s Horn as the only music I know of that conjures a similar feel…and that’s much less of a trick to pull off when you consider that its an instrumental, played on two strings of an acoustic guitar. But Colossal Youth’s shares its sense of space and intimacy and is equally intriguing.

My relationship with Young Marble Giants’ sole album has been a long running and ever evolving affair. I bought it with a vague expectation that it might be something I liked having seen it mentioned from time to time in the music press. This was prior to Kurt Cobain’s championing of the record and Hole’s butchering of Credit in the Straight World (a prime example of something becoming infinitely less powerful as the…well, power, I guess…is ramped up). I hated it at first. It sounded like mopy bedroom music. I found Alison Statton’s vocals to be cloying in the extreme sounding like something the Grange Hill school band might come up with on an off night. And the music had no momentum, at all. And that bothered me, a lot. So it sat on my shelf, gathering dust….

But every so often I would try it out again. You know how it goes. Gradually it wheedles it way in and before you know it, it’s one of your favourite records. Now, I love it all. I treasure the cheesy bits (the song Colossal Youth, Wind in the Rigging), no longer embarrassed by their lack of backbone but in awe of the restraint and bravery in making music that sounds so limited and fragile when your peers were playing with noise, feedback and distortion. And whilst there are jewels scattered throughout this record the run of Choco Loni through to Brand-New-Life is, for me, just breathtaking.

So, twenty(ish) years on, my conversion is complete – I am a Young Marble Giants devotee, an apologist no longer. I’m not sure whether this has been caused by my own maturation, the changing times we live in, or two decades of getting acquainted. Probably it’s a combination of all three. Perhaps my three fellow club members will shed some light on this.

Nick listened: I’ve heard of Young Marble Giants before, but only vaguely – they got mentioned quite a lot in relation to The XX’s debut album in 2009, as a touchstone for stripped down minimalism – but I didn’t really know what to expect when Tom unveiled his choice. And boy, is it minimal – maybe not ‘spacious’, as the vocals are quite closely mic’d – but there’s so little going on, and so much restraint. I really enjoyed it, especially the juxtaposition between some exceptionally childlike moments and occasional instances of something a little darker, almost more abrasive. I think I’ll be investigating further, not that there’s much more to check out…

Rob listened: Young Marble Giants were spoken of in appropriately hushed tones by the time I began my NME-scouring phase in the mid-late 80s. Somehow, inexplicably, I got them mixed up with Cowboy Junkies circa ‘Caution Horses’ and so when I finally got around to listening to ‘Colossal Youth’ a couple of years ago I found myself with more questions then answers. What a strange and rather wonderful record it is, sitting somewhere in the hitherto undiscovered and unsuspected territory between Low and Billy Bragg. One of the recurring questions at DRC is whether a certain record could be made now, or whether it was of its time. This is one that probably could only have been made in a specific 18-month window and that’s no bad thing.

Graham listened: A complete unknown for me. But I cannot recall a DRC offering when I have hung on every note, vocal etc as much as this one. I was always interested to know where each track was going, probably as the sound was so minimal. Some parts sounded like they were heading in the direction of ‘dodgy’ 6th form bands (believe me I should know), but there was always a  mini-drama/humour/ironic touch that demanded you keep listening. Like Rob said, probably of its time, but nothing wrong with that. Left thinking how the band could possibly follow that with another album?