Sometimes you just don’t know how lucky you are!

I chanced upon Spiderland not long after it had been released. My curiosity had been whetted by Albini’s stratospherically hyperbolic review in the Melody Maker (possibly the most renowned signing off of any album review ever?) . But I never actively sought out Spiderland, it was just on my radar when I went sniffing out that next life-changing album. And so it turned out to be…because once Spiderland had got its hooks into me, it just wouldn’t let go; it made much of my record collection at that point in time seem formulaic, safe and unoriginal and in many cases it made me appreciate those awkward, spiky albums (you know: Beefheart, latterday Waits, Red Crayola, Pere Ubu) all the more. For many years (back when I used to consider such ridiculous notions) – especially in those early days when it was MINE and I didn’t have to share it with all manner of post-rock wannabees – Spiderland was right at the top of the tree, my favourite ever album…if anyone would care to ask. So I was lucky to experience it at the moment of birth, when it crawled out of its modest Kentuckian primordial swamp and hear it in all its breathtakingly original glory.

I sympathise with the Nicks of this world who have come to the ‘party’ after the event. Acquiring acknowledged classics long after the hype machine has kicked into top gear is often a curiously hollow experience for me. Appositely, it took me a long time to warm to Closer by Joy Division (Rob’s choice for this round – I purchased it in 1993) because I had unrealistic expectations of what it could offer…it is just music after all, very good music as it happens but still just music! Similarly, over the decades Spiderland has gained almost mythological status with ever increasing numbers of name checks from admiring fans (often musicians) and its sound and structures have been echoed by other acts, some good, many awful. When such a weight of expectation combines with poorly conceived lowest common denominator copycat bands, surely the most likely outcome when listening to the motherlode is disappointment! No, it’s always better to get there first, when you have no expectations and can only be surprised by what you hear on the first listen.

That said, I didn’t necessarily click with Spiderland immediately. I recall getting Mercury Rev’s Yerself is Steam at about the same time and that was a much less subtle more obviously ‘out there’ record than Slint’s offering and so, for a while, that took pride of place on my turntable. But before long Spiderland’s creepy world took over and it was just about all I wanted to listen to for the majority of 1991 – a year that for many is exceptional but for me was all about just one record (I was always disappointed by Loveless, Bandwagonesque and Laughing Stock, much preferring their predecessors. Yerself is Steam went the way of Nevermind and fizzled out pretty quickly despite both having burned bright initially). But Spiderland was the gift that kept on giving, each listen revealing new sounds, fresh variations and dynamics, the atmosphere of the record would alter with the weather, my mood, the location I was listening in. It was quite unlike anything else. Hell, my Nan even thought I was doing the hoovering one day when she walked past my room and it was on. I can think of no higher praise than that!

It was obvious from the off that Slint had laboured over these six songs, which makes the story of Spiderland’s recording all the more remarkable. In a perilous financial situation going into the recording studio, Slint could only afford two days studio time to nail their masterpiece. Luckily they had spent six hours a day every day for the previous six months practising! Even more extraordinary, none of the vocals had ever been heard before as the band only practised the songs as instrumentals. McMahan had never ‘sung’ before either which makes his perfectly judged singing (no one would ever argue that McMahan is a strong singer but that’s not what this is about) on Washer all the more impressive. The upshot is that Spiderland is played superbly and constructed meticulously yet manages to stay fresh and feel relatively spontaneous and real.

Twenty two years on I am still in thrall to this amazing record. I genuinely heard new things on it when listening again prior to our meeting and I am pretty sure that Spiderland will prevail long after its unfortunately oversimplistic mantle as the birthplace of post-rock has long been worn away. Slint never went on to make another LP and that’s right. As my friends will attest, I wouldn’t buy it anyway! After all, how can you improve on perfection?

Nick listened: Sadly I didn’t hear Spiderland until 2007, by which time, sadly, I’d already endured a decade of Mogwai and Godspeed and Explosions In The Sky and other miserable men in black clothes doing things in the name and wake of this record, and it was impossible for me to hear past that legacy. (Good grief, Mogwai are a tedious band, who promise so much and deliver so little. About one song per album is worth taking away.)

So finely did Slint lay down the template for the people who followed them that I’ve been unable to hear them as anything other than cliché themselves; the mumbled vocals, the pointy, repeating & changing guitars, the drums that jar at the edges of where you expect them to be, the passage from quiet to loud, the crushing crescendos. Do Slint do it better? They might do, but it’s a thing I’ve heard so much, and feel I’ve gone way past (it feels like a very late-adolescence, early-20s sound and emotion and instinct to me, and I don’t particularly want to go back there) that I can’t quite tell.

Tom’s passion for this record makes me want to get it though. I’ve dug out my copy of Spiderland, asked for a lend of his 33 & 1/3 book on it by Scott Tennent, and I’ll see what happens.

Rob listened: Will Oldham/Bonnie ‘Prince’ Billy is one of my favourite, most precious artists. I love him and everything he does. I bought the first Palace Brothers records solely on the basis that he was the guy who took the photo on the cover of ‘Spiderland’. I loved that record too. I never understood it, and I never wanted to. I don’t know what they were trying to achieve, have no idea whether they felt they succeeded. I don’t know what other people see or hear in it, but for me it’s a shattered haunted house of a record, constantly shifting, reforming and slipping my expectations. I don’t listen to it too much these days, I reckon because I don’t ever want to solve its puzzles. One of the greats.

Graham listened: Certainly one where the discipline of DRC pays off. Had I been listening alone, I’m not sure I would have got much further than 5 minutes. When Tom suggested some loose comparisons to ‘Spirit of Eden’, I may have expressed myself somewhere along the lines of, “yur avin a laarff”. By the end of 6 tracks, I was intrigued and wanting to hear it again. 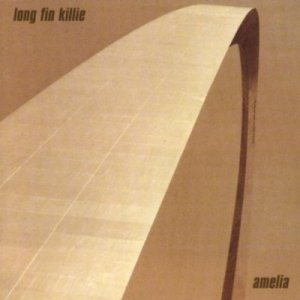 I picked the theme “under renowned albums of the 1990s” specifically so I could finally play this record, which, once again, was one of the first I thought of when Rob suggested we do this thing.

Amelia, like their previous two albums, is named after a tragic hero – Ms. Earhart followed Harry Houdini and Rudolph Valentino. Still intricate, intelligent, intuitive, indulgent and intense, but different from what the band had done before, more concise, more industrial, more muscular, less pastoral. There are none of the extended, minimalist grooves that had LFK defined as postrock; barely anything stretches past four minutes. Guitars chug and grind in aggressively repetitive patterns, bass is deep, informed more by techno’s slickened textures than rock’s organic pastures , and new drummer Kenny McEwan plays relentlessly skittish, drum ‘n’ bass-esque rolls and tumbles, the sonic positioning of tom-tom strikes and rattling snare rolls a precursor to the rhythms that would make Bloc Party’s debut seem so out of the ordinary eight years later.

But the bones of Long Fin Killie’s songwriting – intelligence, irreverence, an unpredictability that manifests as surprising catchiness – remain intact, and are maybe even made more sophisticated by brevity. Beneath the inspirational scree and metronomic tumble there are hooks and choruses, and Luke Sutherland’s amazing lyrics. Black, gay, adopted, and moved by English parents to somewhere ludicrously remote in Scotland, he’s the beautiful, passionate centre of it all, spitting inspiration and bile one minute and swooning sensually the next.

Perhaps the key thing about Long Fin Killie, and in particular their extraordinary musicianship, is the fact that nowhere in their entire career is their consummate skill manifested in the kind of “look at me, ma” soloing that tips so much music beyond acceptability; sure, Sutherland, Colin Greig (bass), Phillip Cameron (guitar) and Kenny McEwan (like David Turner before him) play like virtuosos, but it’s all about teamwork, about balance and subtlety, about being a group. Sutherland may have ostensibly been the bandleader and frontman, but his vocals are often blurred and hidden behind chiming and roaring guitars and rumbling bass.

Amelia was LFK’s last album; Sutherland went on to make more excellent music as Bows and Music:AM, as well as publish three novels (and play violin and guitar with Mogwai, and do plenty else besides!), but theirs is an under-dropped name. I’d mark them down, without hesitation, as my favourite Scottish band ever.

Tom Listened:  I was struck when I listened to this at the meeting the other night at how alike it sounded to Wild Beasts’ more recent efforts, although the LFK are obviously coming from a different direction musically and the excellent percussion throughout Amelia gave it a momentum and lightness of touch that Wild Beasts sometime lack. I really enjoyed listening to this, it was innovative, interesting all the way through and felt like it was one of those albums that is packed with stuff to discover with repeated listens. My only reservation is a similar one I had when Nick played Caribou in that I found myself wondering whether I would feel an emotional attachment to Luke Sutherland’s singing which, on an initial listen, seemed to lack the rawness and vulnerability of so much of my favourite music. I imagine, however, that this would reveal itself with familiarity and I  am keen to listen again.

Rob listened: I have the first LFK album, and i’ve barely listened to it. I think I bought it for the Mark E Smith guest spot, back when I was a Fall completist. I thought it sounded great, churning with fascinating details but, as Nick rightly points out, none of them showily displayed. It reminded me of A.R. Kane when they were turning less dreamy and more poppy and, more than most records we’ve listened to over the last 6 months, I found myself several times zoning out of the incessant nattering of my fellow club members and tuning into some absorbing progression in one of the songs. For me, ‘Amelia’ refused to be background music, which must speak to its power.

Graham listened: Now I have to admit this is way past anything I would normally lend listening time to, as the slightest hint of drum ‘n’ bass would have me turning off. But that what’s great about DRC because I sat and listened and allowed myself to hear the greater depth this had to offer, both lyrically and musically. My previous boundaries continue to be breached.