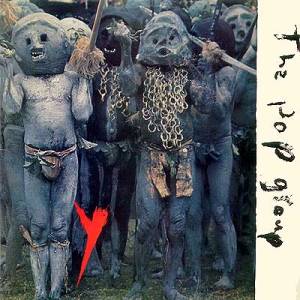 Nick set a theme for the evening. Reminding us that the meeting date coincided with his birthday he batted his eyelashes and modestly declared himself the subject. “Birthdays, beards anything,” he clarified. Ladies and gentlemen let me tell you, sometimes it’s hard to resist temptation. But resist we must.

If my maths are correct ‘Y’, the debut album by Bristol’s The Pop Group, was released roughly 3 weeks before Nick was born, meaning that when he did eventually make his first appearance it was at the point at which the plucky five-piece were beginning to accept that they were not going to storm the Top 40 after all. Whilst it might not have made an impact on the pop charts, this record has banged, clanged and hollered down the years ever since.

We’re fond, some of us, of trotting out the worn-smooth line that in the late 70s punk rock changed everything, creating a Year Zero after which culture could be rebuilt, better. The evidence taken in the round speaks against such a clearing of the decks but it’s undeniable that for some it genuinely was a starting point at which preconceptions could be destroyed and from which new and radical art could follow. Those who went on to make the absolute most of this opportunity did so largely by ignoring the two-chord rallying cry of what we now call ‘punk rock’ and instead adopted the ‘do anything but do something’ artistic template, striking out towards new noises, ignoring constraints and displaying rampaging disregard for the rules, expectations and requirements of rock music.

One of the earliest and most committed of these were Bristol’s The Pop Group who combined jagged funk, slashing guitars, dubby bass lines, exploratory noise and vocals so wild and vitriolic they sounded at times as if they were physically bursting out from frontman Mark Stewart, who was part street corner leaflet pusher, part pulpit thrashing preacher, screaming in tongues, whispering in panic. ‘Y’ was the first of their two albums.

One way or another we speak a lot here about influence, discovery, sequence, timing, originality. It’s impossible for someone as slapdash as me to start to put together a roadmap for a band like The Pop Group. Instead here is a facile observation: ‘Y’, a lacerating musical cluster bomb of control-and-release aggression, came out just 9 years after the Beatles broke up. I’ll accept that this is meaningless if you’ll accept that it makes you sit back and think “holy crap the Seventies must have been quite a decade”.

35 years later ‘Y’ still delivers a significant shock. It’s disorienting and electrifying from the moment it starts, impossible to ignore throughout and almost unimaginable in its scope and composition until you’ve let it work its way into your system and begin to live there. It sounds every bit the revolution its creators were attempting to foment.

Picking back through rock music to find progenitors for this feels like a fruitless task. Sure there’s some of the wild danger of Beefheart at his most blindly instinctive, along with a dash of the Magic Band’s primeval blues. The influence of dub reggae, which runs through much of the most challenging and groundbreaking music to come out of punk, is here, presumably from the same sources that would flow through the Slits, with whom The Pop Group shared a drummer for a while. And there is funk throughout, deployed as an agent of change. But where James Brown may have created funk to get people moving their feet, dancing together towards freedom, The Pop Group use it as a means to propel us towards the barricades, molotov cocktails in our hands.

You have to turn towards improvisational jazz to attempt to explain or trace sources for much of what’s happening here. Rock and pop may not boast antecedents for The Pop Group but presumably Ornette Coleman and Charles Mingus would have recognised much in the stabbing, visceral guitars, searching, fractured rhythms and Mark Stewart’s possessed vocal performances. Almost every track on the album just goes off at some point, dissipating, searching, fragmenting, often destroying a killer groove for two minutes of angry, echoing space. Through it all runs an incredibly deft rhythm section who, you begin to realise, are subtly underpinning the whole thing, bringing back even the most far-flung exploration to the bedrock pulse. Throughout, the playing is exceptional. They may have striven for primitivism in some of their sounds, but the skills they used to create them sound highly sophisticated.

Elsewhere there are slashed up voices and processed sounds which begin to hint at the industrial soundclash approach Mark Stewart would go on to explore with the Maffia, Tackhead and On-U Sound System. There is ‘Don’t Sell Your Dreams’ a dying monster made of collapsing dub which spends 6 minutes trying to decide whether to live or die and can’t. It could and should be unbearable but again there is something, some tiny thread, some lifeforce flowing which brings the piece together into something quite compelling. There’s even a throwaway instrumental B-side bonus track on the CD reissue, ‘3.38’, which seems to casually contain the genetic code for the next 15 years’ worth of hip-hop.

Few were able to follow the scorched trail this band left behind. One group who certainly recognised the breakthrough that had made were nascent The Birthday Party. According to this clip, Nick Cave and his bandmates were utterly enervated and transformed by an early Pop Group performance shortly after arriving in London.

Whilst it’s hard to find many genuine predecessors of this unholy, incredible noise within rock music, hearing it now it’s impossible to ignore how many artists, starting with Cave and co, pushed their way through the breach that this Bristol quartet made back when Nick was a nipper.

Sometimes when you reach back to influential records from the past, it’s hard to put yourself in the shoes or headphones of the original listeners and to feel the visceral excitement they must have felt. Sometimes that’s because the original context can’t readily be conjoured. Sometimes it’s because the artistic legacy has been so thoroughly plundered in the years following as to leave the original source drained. Either way, these records often sound flat, played out even if you haven’t actually heard them before (seeing as we’re in 1979, I’m looking at you Gang of Four). Not so with ‘Y’. If released today it would be utterly thrilling and having come to it properly so late, it’s my favourite album of 2014 so far.

It’s a record in protest at life full of songs in revolt against themselves. It’s unbelievably good, utterly without compromise. It contains the blueprints for a hundred brilliant records, only a few dozen of which have yet been made.

Tom listened: The Pop Group are a band I have wanted to hear for a long, long, time and now that I have, I have to say that about two thirds of the record was worth the wait. Rob primed us before playing Y (funny that I brought an album by X…where was the Z?) that we would have to go with it a bit; that, at times, it would be just a bit too tricky to appreciate on a first listen. ‘Right’, I thought, ‘I’ll show you Mitchell…I’m going to like it all, right from the off’. But, of course, he was right. Whilst the majority of the record was pretty much spellbinding, the other bits simply sounded like self-indulgent proggy nonsense to me, which I find particularly ironic considering this album’s release date and obvious post-punk leanings. So..the jury’s out as far as I am concerned, and I guess that only repeated exposure to the album and familiarity would tell as to whether the less structured side of the record would reveal its true worth…or not.

Nick listened: I’ll echo Tom; this was a confusing record, wherein bits of it seemed like absolute genius, and other parts felt like indulgent dross. Repeat listens would probably unpack the dross and make you appreciate it more.