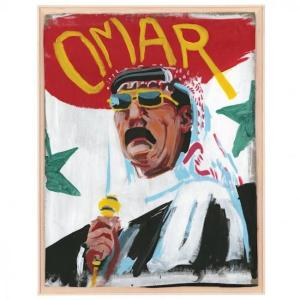 What the hell is an “album of the year” anyway? Despite Tom’s exhortations, I couldn’t pick just one record from last year, and of the four or five that I like an awful lot I’ve already played some either here or at the other place (Melt Yourself Down, These New Puritans) and the others are 75+ minutes in length (Holden, Nils Frahm). So I thought I’d just play something that I liked quite a bit and found fascinating and thought would make for a really good record club experience.

Souleyman’s musical career spans more than 20 years, and superseded his earlier career as a labourer. He’s released more than 700 albums, the vast majority of which are live recordings of performances at weddings, dubbed straight to tape and handed, as a single, unique copy, to the bride and groom. His essence is his live performance, and Wenu Wenu is his first “studio” album, and was produced by Kieron Hebden, aka Four Tet.

Compilations produced for a western audience exist (mostly on the Sublime Frequencies label), hatched together from live recordings, but this is the first time he’s recorded something specifically as an album, to be released on CD, for a British record label (Domino, the same label as Arctic Monkeys, also played this evening), and that can be reviewed, purchased, listened to, and ranked in end-of-year polls according to the suffocating orthodoxy of how we consume music in the US and UK these days.

Souleyman, a native of Syria who now lives in Turkey, plays a type of music called dabke, a popular style of performance and dance across the whole of the Middle East, which is particularly well suited to celebratory events. Like weddings. It consists of intricate, almost hysterical instrumental leads played (on Wenu Wenu, at least) on electric saz (a teardrop-shaped stringed instrument that looks a little like a lute) and a synthesizer imitating traditional Arabic reed instruments. These riffs spiral at the edge of chaos over the top of relentlessly thumping 4/4 rhythms, the mournful lyrics (“wenu wenu” means “where is she?”) and dramatic delivery at odds with the rampant tempos.

If you need a western comparison as an entry point, then it’s dance music. Really fast, electronic dance music. Wenu Wenu is a string of club bangers, only relenting when the final two tracks slow the pace a tiny bit. “It used to be slow, but when the keyboard came into this music, every year we made it faster, until we reached what we have now,” Souleyman said to The Guardian last autumn. You can hear why DJs looking for something esoteric and different to drop into a set without breaking pace would choose Souleyman, why Hebden wanted to record him.

“I have a good voice, and am interested in music,” Souleyman also said, and he does. I gather from people who are properly into dabke and other Middle Eastern genres that there are better wedding singers out there than Souleyman; some of them seem perturbed that he has crossed over into the European and American musical consciousness when others haven’t. I can’t speak for that, but I can say that Wenu Wenu is great fun, and strangely moving, and slightly uncanny in its fusion of familiarity and otherness.

Rob listened: More reports from the frontline of a fracturing musical landscape. Say what you like about Omar Souleyman, call him a novelty cross-over, a hipster breakthrough act, the fact is that we’re at a point now where we can discover the work of a frenzied Syrian wedding singer and marvel not only at the energy, the textures, the sheer fizzing pizzaz of it, but also at the fact that it sounds pretty much like the sort of stuff we could be hearing on niche dance labels or on a 3am dancefloor. I don’t know whether this means we’ve come full circle, whether music is running out of ideas or catching up with its own future, but I love the implied chaos and I specifically love the idea of this chap rocking up at a wedding in some corner of Syria and banging out tunes most scowling dance acts would kill for.

Tom Listened: Although I enjoyed Wenu Wenu, I found the first two thirds of the album pretty exhausting. It’s my age! At first the relentlessness of the sound was captivating but by the time I had finished my Balti, I was wishing for a bit of variety. And, almost instantly, it came, the last couple of songs being much slower and groovier. If the album had a bit more shade to go with the light (or, even, if it had been sequenced differently) I would probably be championing it unequivocally.