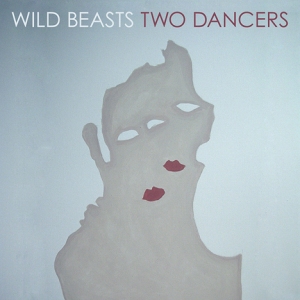 A quickly-arranged meeting with an agreement to play short records because one of us has had a baby or something; I had three records in mind, all under 40 minutes, two of them American, one of them British. When I realised it was St George’s day, the choice became obvious: old George, English hero, spend a big chunk of time rampaging round Europe like a drunken idiot, abusing women and starting fights. Wild Beasts are English, and Two Dancers casts an unflinching eye over the baser instincts of gangs of young men. It seemed fitting.

In some ways Wild Beasts are a classic four-piece rock band, but there’s a lot more going on with them than that reductive description suggests. The songs on Two Dancers unfurl and evolve in ways which aren’t obvious and which seem capricious at first, but which start to feel refined with familiarity. Rhythms lock together and interplay in understated, compelling ways for extended periods. The band’s two (extraordinarily gifted) singers occasionally indulge in whooping, sensual cacophony, and there are explosions of almost-brutal guitar noise amidst the sensuous grooves. The tension between rhythmic and structural control and the emotional releases that puncture proceedings is exhilarating, but it seems much more controlled now than it did before.

I’m not normally one for dissecting lyrics, but the words on Two Dancers are fascinating. They could easily be taken as saucy, salacious even, if they weren’t also laced with disturbing, menacing imagery. You could see the album as presenting a narrative arc, beginning with songs which unflinchingly reveal the baser instincts of groups of young men out on the town, offering only description and leaving critique to the listener, ruthlessly depicting drunken one-night-stands (“trousers and blouses make excellent sheets / down dimly-lit streets”) and murderous sexual possessiveness; “Hooting And Howling” openly threatens to murder “any rival who goes for our girls”, the protagonist refusing to excuse himself, acknowledging the brutality in his nature.

Things climax unpleasantly with “Two Dancers (I)”, which seems to describe a sexual assault from the point of view of the victim; sung in a throaty, masculine boom, it acquires a disquieting air of disconnected sympathy. Is this the inevitable end-point of the untethered (unfettered) and unchecked and irresponsible masculinity already depicted? “They dragged me by the ankles through the street / they passed me round them like a piece of meat / his hairy hands / his falling fists / his dancing cock / down by his knees / I feel as if I’ve been where you have been”: the picture painted is stark and shocking and unflinching, but the context is vague, the narrative voice not explicit, the melody forces you to sing along and thus insert yourself into the trauma, the singer seemingly separating himself from the narrator, forcing you to identify with the victim. The final two songs seem to portray first guilt on behalf of the protagonist and then condemnation on behalf of his culture.

Two Dancers is a hell of a journey to undertake as a listener, as emotionally draining as it is exhilarating. And it takes less than 38 minutes to do it. It’s an incredible record, one of my very favourites. Hell, I even own a Wild Beasts t-shirt, like a fanboy.

Rob listened: Wild Beasts are a band to be cherished, not least for the way they have explored and understood their own sound and aesthetic, focusing relentlessly on the pulsing core of what they do/want/need and getting to it. In some senses their greatest achievement is their progression across three albums, meticulously stripping away the extraneous to get to ‘Smother’, perfect distillation yet still one which depends on its two predecessors to evidence what has been excised and thus illuminate its full splendour.

Going back to ‘Two Dancers’ after listening so much to ‘Smother’ I was surprised at how close the two actually felt. For me ‘Two Dancers’ was always unavoidably, and arguably unfortunately, dominated by ‘All The Kings Men’, a perfect intelligent pop single. Reflected against the album which followed it, the rest of this collection really shines. Unlike Nick I never found ‘Two Dancers’ a disturbing listen, to the extent that I never really worked out which was the gang rape song all the critics were referring to. I just loved the sounds, and now I think I love them even more.

Tom Listened: I bought the first Wild Beasts album, Limbo Panto, having been seduced by hearing the singles from it being played on 6Music. It was hard to ignore them, they sounded way off kilter but were hook laden and relatively accessible at the same time. They certainly stood out on the (lamentable) Steve Lamacq show when they were often surrounded by hours of the indie by numbers drivel he is so fond of playing. But the album itself was too much for me, voices strain way beyond their comfort zone, lyrics are smutty and too clever by half, songs are unrealised and underdeveloped. The singles were (by far) the best thing about Limbo Panto. So I kind of decided to part ways with Wild Beasts at that point.

Then, a couple of years later, Rob lent me a copy of Two Dancers. What a revelation! There can be few examples of bands raising their game so much between their debut and sophomore recordings. Two Dancers is not perfect and is still, to my ears, inconsistent, but the highs are many and very high indeed. The band sound confident and have begun to understand how to use their (amazing) voices to best effect. So I like Two Dancers a great deal but not unequivocally. However, one thing is for sure: with the song All The Kings Men, Wild Beasts surely have one of the best singles from the last ten years.

Graham listened: I must be a sensitive soul as I found this highly disturbing. Given the imagery and lyrical content, I felt I needed to go back to Smother, to see if I had missed something when I listened to that. Wary of the lyrics of Two Dancers, I needed to find child free time to do so and finally managed it tonight while making a risotto (its a great risotto album, nicely paced, could be on to a future theme here!). Whereas Smother seemed instantly accessible and the vocal styles seemed to fit, Two Dancers was far more of a challenge for me on all those fronts. Not saying I won’t get it in the end, but I would need to give it time to grow, or more appropriately, subvert.