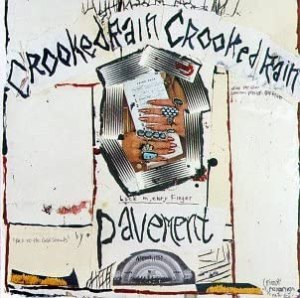 Much of my life has panned out more or less as expected. If the twenty five year old version of myself was to have been told that at the age of fifty I would be living in a sleepy village in rural Devon with Karen and two wonderful children, still working in education, but not in school any more, and that I still get to go rock climbing every so often…I don’t think I would have been too surprised. However, if the twenty five year old me was to have found out that at this age I would have been in a record club that was convening for the one hundred and twelfth time and that in all the previous meetings not one of the members of the club had played an album by Pavement (and that, in fact, Pavement had barely been brought up in conversation), well I probably would have called you out as a liar!

In the mid nineties Pavement were top of my go-to list. Crucially almost everyone I listened to music with (the aforementioned wife, many of my friends…as well as my brother, Ben) held a similar point of view that Pavement could do no wrong. Whatever the situation: Friday nights in relaxing in our cherished little two up two down in Newton Abbot, car journeys in my newly acquired clapped out Citroen BX, holidays abroad (Brighten The Corners is the sound of the Costa Blanca for me), pretending to be grown ups whilst ‘entertaining’ friends at a dinner party…Pavement were ubiquitous. The one clear memory of the dreadful days after my beloved, brilliant brother shifted off his mortal coil is of driving out of my parents’ house to go home to Devon and having to pull the car over to the side of the road within the first mile as We Dance (Wowee Zowee’s opening track) reduced me to – literally – floods of tears; this was a precious music that held us connected  as adulthood was beginning to loosen the bonds that had kept us locked together through our youth and the track’s poignancy; its skewed lyrics, mournful chords and sheer bloody mindedness to be different without so much as a conscious thought was just too aligned to the character of the pal I had just lost for my fragile emotional state to cope with.

So it’s incredible that here were are, practically ten years into record club and this is the first time I have been able to write about what is, for me, the band of the nineties…their five albums spanning the decade from 1992’s incredible opening salvo (Slanted and Enchanted) through to their 1999 swansong, the misunderstood and probably underappreciated Terror Twilight. Until recently I have always held the sprawling, messed up, yet gem filled, Wowee Zowee as my pick of Pavement’s five albums but a chance encounter with Crooked Rain’s lead single, Cut Your Hair (a lockdown anthem that was being played on 6 Music as I was doing the gardening…a lockdown activity!) has encouraged me to re-evaluate. And I have fallen in love with this neglected masterwork all over again, probably 15 years at least since I last pulled it off my shelf and put it on the turntable.

I recall someone a long time ago on Desert Island Discs relating that he listened to pieces of music until he felt that he had ‘worked them out’, until there was nothing left to discover. I think he was explaining why Bruce Springsteen was so enduring a pleasure for him as he had never reached that point with any of his records. But I guess I had felt I was at that point with Crooked Rain, I had listened to it so many times over the decade since its release that it had worn itself out, every twist and turn could be anticipated, every lyric regurgitated, it aural landscape resembling the back of my hand! So familiar was it that I was no longer hearing its sound or appreciating its textures, warmth and sense of fun, I’d stopped seeing it holistically and could only consume it as a set of twelve distinct morsels all of which I had wrung dry.

But coming back to it recently I am once again in thrall to the album, the passing of time enabling me to appreciate the record as a complete piece of work. Sure, it’s got that trademark Pavement messiness going on; the lyrics are often off-kilter and surreal (but just as often hilarious: “Out on my skate board the night is just humming” or “til five hours later I’m chewin’, screwin’ myself with my hand”) and the songs are a stylistic smorgasbord that shouldn’t really work – check out the final five song run that goes through Dave Brubeck jazz tribute, country rock, indie folk, The Fall and then Bowiesque grandiosity.  But having immersed myself once again in this glorious high point of mid-nineties indie rock the one thing that I forgot to remember at the time I grew out of love with it way back when is the fact that these are pop songs par excellence (Gold Soundz, Cut Your Hair and Silence Kid being three of its finest exponents just in case you’re reading this and want to do a bit of YouTube ‘checking outing’). Pure and simple, wonderful pop music of a kind that I don’t think is (and am not sure, could be) made anymore.

Steve listened: Thanks for this account of why you love the album Tom. Hard to write I am sure. I loved hearing this album, but must confess to having only heard the ‘hit’ Cut Your Hair (which was an old dancefloor favourite in student days). The album does take a lot of genres in, all with a feelgood vibe going on. I really liked ‘The Fall’ track. The sort of music you could hang your leg out of the window whilst driving along to – if you were still young and carefree…