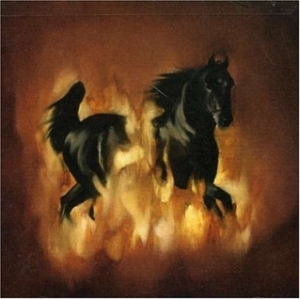 ‘Inspired’ by Steve’s attempts to ‘proggify’ us at the previous meeting…and neatly tying in with Rob’s Godspeed offering as well I decided, at the eleventh hour, to take Are The Black Horse along as my choice for Nick’s supremely poorly disguised ‘bring anything as long as it’s not prog’ themed night. He couched this, in the literal sense, as ‘bring something recent’, but we all knew what he was getting at. I thought, however, that it might be fun to poke the bear and seeing as The Besnard Lakes have occasionally had the ‘P’ word used to describe their work, I couldn’t wait to see Nick’s reaction when subjected to what may be the proggiest record in my collection.

However…it turns out that Are The Dark Horse is actually not very proggy at all. In fact, I would say it leans closer to shoegaze, post-rock or psychedelia than prog, only evoking those hoary old behemoths of excessive tempo and key signature alteration during the occasional guitar solo, or in the airbrushed cover art and the ridiculously pretentious album name.

To be honest, I have never quite clicked with the music of The Besnard Lakes. Whilst they are one of those bands that I have always felt might play a blinder at some stage of their career, the two albums of theirs I do own (this and the one with the even sillier name about UFOs) are just a little too po-faced and monochrome to really draw me in. That said, there is much to admire – the swooping melodies for a start, often aching with melancholia, are beautifully realised, especially on the first two tracks of the album, Disaster and For Agent 13.

Third track, And You Lied To Me, is the album’s epic and, as such, is probably its proggiest moment, segueing from one movement to another over the course of its 7 minute duration. But this is prog 30 years on and whilst the structures may echo past glories/misdemeanours, the music has been filtered through a lineage stretching from Glenn Branca, to Sonic Youth to Broken Social Scene, so there is only the faintest whiff of the 70s art form present on this, or indeed any other track on the record. Because Tonight is similarly lengthy but is far more straightforward in construction and plays like an indie band dabbling in post-rock probably thanks, in no small part, to the influence of Godspeed You Black Emperor’s Sophie Trudeau guesting on the album. The record closes with a gorgeous Beach Boys sound-a-like in Cedric’s War, its warm bounciness and summery vocals making it very much an outlier and a welcome one as far as I am concerned.

But that’s not to say that the album needed a change by track 8, it doesn’t. The preceding seven tracks (well, with the exception of Devastation, which I have never really got on with at all) are all lovely, interesting…compelling even. It’s just that, as an album, Are The Dark Horse doesn’t really draw me to it very often and, when it does, it doesn’t tend to keep me coming back for more. I’m not entirely sure why this should be the case…all I know is I’m glad the album exists, I’m glad to have it in my collection and I super relieved it didn’t turn out to be proggy at all…apart from the fact that, for me, the album as a whole seems to add up to less than the sum of its parts (see my response to Trespass in round 97).

Nick listened: Rockier than I expected.