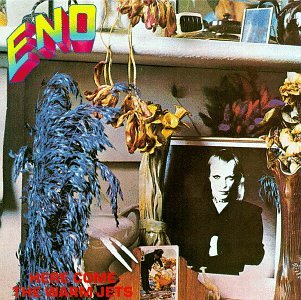 As far as I am concerned, Brian Eno is, in many ways, the polar opposite of Neil Young. In the case of the latter artist I own an inordinate amount of music (bewilderingly, I found myself buying yet another Neil Young album – On The Beach – not so long ago to add to my inexplicably large collection) without ever really understanding why he is held in such high esteem (Tonight’s The Night being the exception, but even that is some way down my all time greatest albums list). Eno, by contrast, I love. He’s always interesting, constantly innovating; refreshingly challenging whilst remaining, essentially, accessible. I admire his eloquence, his creativity, his obvious and flaunted intelligence and his visionary approach to pushing the boundaries. Yet I only own two albums by him. They are Ambient 1: Music For Airports and Here Come The Warm Jets…and they sound like they could have been made by different artists on different planets! In fact, Another Green World, Nick’s choice way back in round 6 sounds different again although traces of both albums (if I recall correctly) can be heard echoing distantly on this, the third album Eno made as a solo artist.

So what is Here Comes The Warm Jets? Well…I’m even more confused than ever. It’s all of these things: groundbreaking, bonkers, beautiful, calming, unsettling, surprising, melodic, discordant, intriguing, unpredictable. It’s none of these things: formulaic, bland, safe, unapproachable, intimidating.

But is it pop music?

Well, that question led to some heated discussion on the night between (unsurprisingly?) Nick and myself. I think we were listening to Dead Finks Don’t Talk at the time, a track which sounds, if anything, like a weirder version of early Gorky’s Zygotic Mynci (ie, when they were really weird, not ‘throw a couple of dogs barking in between two stunningly beautiful folk ballads’ weird) and I posited, perhaps foolishly, that for a man who had just come out of Roxy Music, a band that had recently experienced significant chart success with Virginia Plain, Do The Strand and Pyjamarama alongside impressive album sales for both their first two albums, this was a pretty ballsy move, a statement of intent that here was a man far more interested in making music for its own sake than for chasing fame and fortune. Sure, it’s not Oneohtrix or Emptyset or another one of those ‘Rob bands’ that seem to exist purely so that he can revel in the effect they have on Graham’s sub woofers (no euphemism intended) but I wouldn’t class it as ‘pop’ music either.

Admittedly, there are glimpses of pop on the album. Opener, Needles in the Camel’s Eye for example is a glorious three minute blast of noisy momentum with a hook laden guitar solo as its coda – a bit like getting on a pop bus with a breeze block on the accelerator and careering into Avant-Gardesville in  a spectacular multi-coloured explosion of sounds and wailing. Elsewhere, Baby’s On Fire sort of sounds like pop music if you narrow your eyes, squidge your ears and use your imagination but has some of the most blistering fretwork ever committed to vinyl. And Eno’s singing, if it can be called that, is more of a snarky sneer; all nasal passages and sheep-like tremelo, a bit like Kenneth Williams saying ‘I told you so’ over and over and over.

Other tracks drift by (On Some Faraway Beach, Here Come The Warm Jets) in an (almost) instrumental, (almost) ambient haze, or lurch out of the swamp laden with dirty grooves and monster loops (Driving Me Backwards) or sound like a crazy loon having dropped one tab too many (The Paw Paw Negro Blow Torch).

I like Record Club for many reasons but one of them in particular is that it has the uncanny knack for making me re-evaluate my preconceptions, prejudices and firmly held beliefs, about music in general and, more often than not, music that I have owned (and loved) for many years. This discussion was no exception; it got me thinking about what pop music is, what it’s for and, crucially, what it isn’t. And so I have thought about it for a long time now – I played this album on our Bowie tribute night about two months ago – and I have concluded that pop music is different things to different people and, for me, by veering close to the line every so often and offering that glimpse of pop nirvana only to head off again just as rapidly, Here Comes The Warm Jets is about as far away from pop music as you can get..and to exemplify the difference in what I mean, I dug out one of my favourite pop albums for Round 89…

Rob listened: I was really pleased to finally get up close to ‘Here Come The Warm Jets’, for a couple of reasons. Firstly, before I’d looked at the cover art properly, I had always thought that the blue grass plant on the left of the image was some sort of Cookie Monster creature. Turns out it’s blue grass. Of course it’s blue grass.

Secondly, I’m a little distant when it comes to Eno. I admire his for many of the reasons Tom lays out above, but I guess I’ve always carried the sense that his music is an intellectual exercise, rather than an expression of passion or feeling. I stress, this is based on an ill-informed sense of Eno the man, rather than any significant exposure to his music.

Which makes this record such a thrill. It may or may not have significant intellectual or artistic intent, and we know that Eno has always been a thoughtful advocate for the interlinking of the two, but regardless, it’s a careering rock record, running wild with its own ambition, cackling as it tips over accepted norms. In that regard it reminds me of Michael Moorcock and JG Ballard, authors who were also at large while Eno was stretching out, and who also took seriously the project of using genre conventions to create new, unconstrained and transgressive art.

What’s particularly great about this album is just how effectively Eno marshals all of this into accessible and loveable music. And, directly or indirectly, this seems to me to be pop and rock music as much as The Kinks (‘Cindy Tells Me’) or Peter Gabriel (‘Baby’s On Fire’)  or Elton John (‘On Some Faraway Beach’). As for ‘Dead Finks Don’t Talk’, I was out in the kitchen making tea when it was playing, and I distinctly remember thinking ‘wow, this is a great track’. I loved the skittering groove, the focus of it, it’s simplicity and it’s motion. Then I came back in to find that it was causing some sort of ontological dust-up in my dining room. I thought it was straightforward, loveable music. With a weird shrieking guy hiding behind it, but, y’know, in a good way.