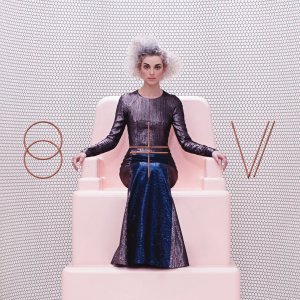 My album of the year. More than anything, just because we should be cheering the very fact of its existence. When something as perfectly formed, as carefully worked and just as damned flawlessly good as this comes along, we should be stopping what we’re doing and declaring national holidays. Instead, it seems somehow, as if this record has been strangely sidelined, as if the tastemakers are reaching the end of 2014 and saying ‘oh well, of course the St Vincent record is incredible. After all, she’s always been incredible, so why wouldn’t she produce an incredible record. And therefore, it doesn’t really count. Stick it somewhere half way down the list.”

Well, it does count. It counts for all sorts of reasons.

It counts for what she does with a guitar. She chops it, slices it, shreds it, chunks it, skings, kapows and blams it. She is, as far as I can tell, the most devastatingly brilliant guitarist currently playing this most played of instruments. She turns her guitar into a buzzing, blatting, beeswarm machine-gun, chopping out riffs and runs that sound like no-one else. What she does with a guitar is simultaneously so surgical, so acidic and so twisted as to sound barely like a guitar at all. I don’t care about musicianship in and of itself, but she makes me stop being so stupid and care about guitar playing. She is, let us be in no doubt, an absolutely unbelievable guitar player.

It counts for what she does with a pop song. Having started her career taking avant-garde headscapes and mashing them through the blender of her fender (Editor’s note: She actually plays a Musicman) she has, like some of my favourite artists of the last couple of years (hello Wild Beasts, Vampire Weekend) found ways to compress all of this wildness and willfulness into the boundaries of the three minute pop song. In doing so she has shown just how much more we could and should be expecting from everyone making records. The tracks on ‘St Vincent’ reference contemporary pop, rock and RnB left, right and centre, but they are simultaneously as challenging, other-worldly and head-mashing as the best of those genres. About half of them are just total bangers too.

It counts for what she does with sound. Not just what she does with the sounds of her guitar, but right through this record lie scattered gorgeous details. Her voice breaks into grains, toughens up, ascends and dives, as wild yet expertly controlled as her guitar. Sometimes we’re left with a ticking beat to luxuriate in, at others we’re overwhelmed by a tornado of noise. Everything in between is deliberate and perfectly placed. One of my moments of the musical year is when ‘Digital Witness’ really boots up heading into its chorus and sweeps you off your feet. It’s like to moment you step onto the moving walkway in an airport. There’s a tender but forceful whoosh. The more you listen, the harder it is to say how she does it, but she does it, every time.

It counts for what she does with a composition. ‘Bring Me Your Love’ brings together an amazing drum performance with numerous dizzyingly brilliant flavours of guitar playing and then adds in a vocal cadence which seems initially to make no sense, then turns out to be perfect, plus, for good measure, some incredible voice performance (“I thought you were like a dog…”). Every single element of this piece is amazing. Brought together, they make a super-amazing song. Which is mega-amazing.

We should be grateful that there are artists out there making music quite as accomplished as this. Which is not to say that this is merely an impressive achievement in some abstract technical terms. It’s the real deal. Smart, affecting, dazzling, accessible, funny, funky, rocking, rolling, riding. A record we can all be proud of. Sometimes, someone just gets it so right that all we can do is step back and cheer. This is one of those. A solid gold, back-of-the-net winner.

Nick listened: I’ve been a fan of St Vincent since Actor, and think this record is fabulous for all the reasons Rob has outlined. It’s easily one of the records I’ve enjoyed most over the last 12 months. It’s an immaculately-crafted piece of artful pop; clever, fun, interesting and full of brilliant ideas at every turn, and it feels like an important and significant levelling-up of an already really, really good musician. And yet… and yet… I can’t quite bring myself to ‘love’ it enough to call it my favourite. Annie Clark’s always been a little performative and arch, knowing and subversive, and I wonder if this translates, to my ears, as a slight emotional reserve, which, while it doesn’t temper the obvious musical brilliance on show, does affect my ability to connect. The Sharon Van Etten album, for example, is nowhere near as exciting to me musically, but I feel much more connected to it emotionally. (I probably do prefer St Vincent though, just.) Thinking about it, though, I feel much the same about her other records; they’re wonderful objects, brilliant things, like beautifully-designed chairs or fabulous bits of architecture. Which is great (I love beautifully-designed things), but leaves me just a little unsatisfied for some reason.

Tom listened: I’ve been a fan of St Vincent since Actor too but, mainly due to the astronomically inflated price of the vinyl version (£27 when I last checked), I hadn’t bothered with her latest offering. I was also put off a little by the fact that Strange Mercy and me never quite hit it off. Then there were those lyrics from lead single Birth in Reverse which seemed too calculated, too considered, too ‘let me shock you’. I was a little weary and more than a little wary that Annie Clark’s fourth album would be another step down from the triumph that was Actor.

Well, I couldn’t have been more wrong. In my opinion one of the only missteps of ‘St Vincent the album’ has been the choice of singles – they seem to me to be a little St Vincent by numbers, echoing past melodies too closely and not really doing that much different sonically from what had come before. The deeper cuts in the album, however, were often astonishing and, crucially, took me a long way away from the standard St Vincent song template that I heard in the singles. So, I started off listening sceptically but by the end of the album the combination of Annie and Rob had almost completely won me over.