To be honest the chances of me finding 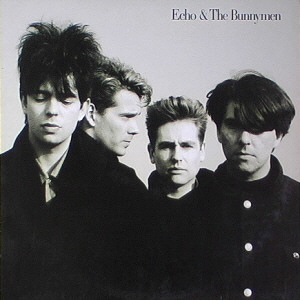 any “hidden gems” by Round 73 were thin on the ground. Any curios I possess had probably been presented by now which left me looking for an album I liked (rather than cherished) but haven’t thought to bring along before. Consequently I really can’t find much to say about it!

Having produced ‘Ocean Rain’ at my virgin initiation  round way back, I found myself turning to the Bunnymen’s self titled 5th album for this choice. I can’t think of too many artists that have waited until their 5th album to go down the eponymous route (but expect someone will be along soon to point out how wrong I am on that), but maybe that suggests something about how the band were on the point of implosion by this point and maybe there was something of marking the end of an era.

My basic view is that there are 4/5 great pop songs on this album that lack maybe the edginess that people had come to expect from the band and meeting the standard set by ‘Ocean Rain’ was always going to be next to impossible.  ‘The Game’, ‘Bedbugs and Ballyhoo’, ‘Lips Like Sugar’ and ‘All My Life’ still all tick big boxes for me. The struggle with various recording locations, production and band cohesion give the album a strange bright and brash sound. The lush strings on ‘Ocean Rain’ are replaced by colder sounding keyboards which don’t work on all the tracks by any stretch of the imagination.

Scratch away at the surface and I still think some of their catchiest and best crafted songs are on this album with Ian McCulloch’s vocals complementing the songs rather than being overly dramatic/bombastic. Not their best, but certainly enough to keep me listening. Break-ups and reincarnation followed and I can’t comment on what came later as I’d moved on.

Rob listened: I can’t recall where we went on holiday in 1987, but I know that when I managed to get into the nearest Woolworth’s (I assume) to fork over my pocket money for a new cassette to stick in my walkman to pass the hours in the back seat of the family car, this is what I chose. ‘Songs To Learn and Sing’ was an iconic record for a mid-80s school-kid, and I knew half the songs on there from fleeting radio contact, but this was the first Echo and the Bunnymen record I got my hands on. And it didn’t sound quite as I’d hoped or expected. No drenching reverb, few yearning strings, relatively little solipsistic grandeur. Almost a different band, except for that voice. I listened to the album a lot, as I did everything I owned then, and whilst it never crossed over to become a favourite, there were songs here that created an itch I found very hard to scratch. Opening track ‘The Game’ is the best example. There is drama in there but it’s carefully, economically dispensed. I didn’t understand that at the time: I wanted maximalism. But all the same, I couldn’t stop listening, rewinding, listening again.

Hearing the album again was a treat. There are, as Graham says, some great songs herein. Mostly though it reminded me of how it felt to dive into music just because it was what you could get your hands on, to go deep and, when you surfaced, to find you still had some of it inside you. And try as I might, there’s something here I can’t scratch away.

Tom listened: As someone who never really got the appeal of Echo and the Bunnymen (I could never get past McCulloch’s ego…and I only became aware of the band when said ego was already fully formed in about 1984), I was surprised at how palatable the eponymous album was. I probably preferred it to Ocean Rain, I imagine for precisely the reason I am supposed to like it less, in that it doesn’t sound so much like an Echo and the Bunnymen album. A collection of nice enough songs!

Nick listened: My Bunneymen knowledge and interest pretty much starts and stops with Ocean Rain, although I do own a couple of the albums from earlier in their career. So I’d never heard this, and didn’t really recognise any of the (pretty fine) tunes. The production did definitely feel at odds with what I understood the Bunneymen’s signature sound to be, and though I don’t object to the overall aesthetic in general, I don’t feel this was the best embodiment of it.