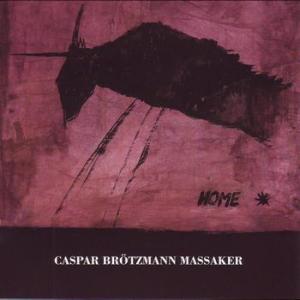 There’s a thread on I Love Music called ‘I Never Play My Caspar Brötzmann Records! And Yet, I’ll Probably Never Get Rid Of Them‘. In fact, it’s the only Caspar Brötzmann thread on I Love Music. On it are some familiar descriptions of records accrued and never really listened to, of artists pursued who never quite produce what the listener is chasing in hope of finding. It’s a familiar pattern and not, one imagines, confined to Caspar Brötzmann. I’m sure the sentiments expressed are pretty common amongst all those who pursue experimental/ambient/noise acts down the rabbit hole, buying record after record, each time hoping that the next one will see the sound coalescing into that thing they’ve always wanted to hear but which they can’t quite imagine for themselves. I have some sympathy.

I only have one Caspar Brötzmann record and it’s this one. I like it pretty well.

Brötzmann is the son of Peter, a German free jazz saxophonist who is prolific in a way that perhaps only free jazz saxophonists are able to be (“Sie wollen mich wie lange spielen? Kein problem”). I’ve never heard him, but he seems well renowned. I know no better than to take the direct route and surmise that his son Caspar followed his dad’s lead, wielding an electric guitar rather than a saxophone. We could pause to pick the wild assumptions out of that statement but let’s move on instead. Time is short.

Caspar Brötzmann Massaker are a trio of musicians who, in this guise, recorded 5 albums from 1987-95, of which ‘Home’ is the last. It’s a record ably summed up by its cover, a pseudo cave painting of a bison, also made by Bröztmann. The album’s five tracks come down as if carved from rock by willpower and weaponry. They’re long and harsh and doomy but not self-consciously complex. Most veer around heavy lurching grooves, the three players slipping into and out of gear with each other and giving the whole piece a momentum which sometimes stutters, sometimes roars. Too focussed and direct to be free jams but too wild and brutal to be careful compositions, the best sections begin to create a sort of stunned energy as the three players get stuck into their instruments and each other.

I have no idea where ‘Home’ sits in the Brötzmann family canon, but it’ll do for me. Perhaps I should start my own thread: ‘I Have One Caspar Brötzmann Record and I’m Happy With That Thank You Very Much’.

Tom Listened: For me, this was the musical equivalent of multi-variable calculus – bloody difficult. That’s not to say it was not good to hear it, I now can at least start a thread ‘I have no Caspar Brötzmann Records and I’m Happy With That Thank You Very Much’ and have a vague understanding of what I’m talking about. Besides that 50+ minutes of doom laden monolith rock – I think I just made up a genre (get me!) – certainly acted as a contrast between what came before and after it. And at least Rob stuck to the theme.

I guess by now, Rob can predict what I am going to like and dislike before he plays it to me so he probably won’t be all that surprised by my reaction. Thinking about it, I am probably at my most predictable when the adjective that can used to describe the music is ‘oppressive*’ – I’ll add Home to the records we’ve had by These New Puritans, Sun 0))) and Mark Hollis.

* I freely admit this is my adjective and that my fellow club members will probably be wondering what I’m talking about, thinking that all these bands make music that is in the same sonic ballpark as Katrina and the Waves.

Nick listened: Whereas I thought this fitted almost perfectly with the mood established by Arvo and evolved by Swans – sonically it felt like it inhabited the same universe as the latter, albeit coming from a different direction. There was a certain jazziness, probably genetic, in this, but it was subtle and foundational rather than overt or explicit. Tom’s on the money describing it as ‘oppressive’ though, and I have no qualms with him using that adjective – I just happened to rather like it where he didn’t seem to. The only thing I might say is that once Brötzmann had established his aesthetic there was little deviation from it – I wasn’t surprised or intrigued at any point by directions the music took, not that this is necessarily a problem. Having said that, Brötzmann was on during takeaway time, so I may have missed some nuances. Rob, when you read this, I’d be grateful for a lend of your one Caspar Brötzmann record, and that will probably be enough for me.