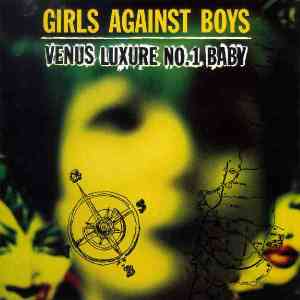 After last meeting’s ‘Guilty Displeasures’ it was good to get back to normal and have records that we actually liked to listen to! That said, I wasn’t sure how Venus Luxure No.1 Baby would be received – alongside Todd Rungren, The Beastie Boys, Owen Pallett and The Necks, Girls Against Boys share the honour of being one of the few bands my long-suffering wife has ever offered a negative opinion on. And listening to the record again in the time leading up to the meeting, it was easy for me to see why – this is a harsh, abrasive sound, Scott McLoud’s voice grinding away like Mark E Smith with tonsillitis whilst his band conjure up the dirtiest, muddiest grooves ever to come crawling out of the swamp. Catch it on a bad day (ie a good day, bright sunshine, birds tweeting in the back garden, freshly baked bread etc) and it can sound so incongruous that it will need to go back on the shelf immediately, even before the (thrilling) introduction of In Like Flynn is over; although there are grooves galore on this wonderful record, it is about as far removed from the Jackson 5 as can be. But slap it on the turntable on an early Autumn night as the ever shortening days become increasingly apparent and the first post-Summer storms sweep in from the Atlantic and you’ll be in early 90s post-hardcore heaven.

I thought Venus Luxure No1 Baby was pretty under renowned at the time it was released, but in our meeting Rob heartily disagreed. The reasons for my mistake could well be due to the circumstances with which I bought the record back in ’93. Stumbling into my favourite record shop at the time (Replay Records in Bristol) , I chanced upon the record in their new releases section. The shop used to put stickers on some of the albums with handwritten comments by the staff and VL#1B had garnered a particularly complementary one. So I pulled it off the shelf, had the guy behind the checkout confirm that it was one of the top five records of the year (in fact he said it was probably #1, somewhat appropriately!) and walked out with my purchase having never heard a note or read a word on the band before. The thrill of putting a record on a turntable and having next to no idea what it will sound like (alright, it was on Touch & Go, so that offered a clue) is one that is increasingly hard to come by in these days of Spotify, 6music and Apple adverts and one that I miss. VL#1B hit the spot immediately. I have never been a fan of the bleaker end of US hardcore but I found Girls Against Boys’ sound to offer just enough light and colour so as to render their music captivating, accessible and unexpectedly groovy. There were wonderful surprises all over the record – the amazing bass runs on songs like the aforementioned In Like Flynn, Go Be Delighted, Bug House and Bulletproof Cupid, the use of keyboard riffs on Billy One Stop, Eli Janney’s whoops on Seven Seas, Rockets Are Red’s monstrous guitar riff, the fact that I could hear (admittedly) faint echoes of Slint at times – it is the multitude of ideas and idiosyncrasies that lifts VL#1B out of the genre, to stand alone as one of the pinnacles of the US Indie Rock scene of the time.

I was fortunate to see GVSB in 1993 and it is, to this day, my favourite gig ever. GVSB went on to release two more good to great albums, Cruise Yourself and House of GVSB but they never again matched the natural magnificence of Venus Luxure No1 Baby.

Rob listened: I loved V-Lux at the time and it still sounds just as good. I probably came to it more gradually than Tom, following a trail from Big Black, Husker Du and Fugazi that led me to the Jesus Lizard, GVSB and a bunch of stuff that woud certainly tip the bleak end of Tom’s hardcore scale. For me, GVSB are dirty sexy, driving, hard pop music. Pop in the sense that I can’t imagine why anyone wouldn’t be thrilled to hear this record. I’m delighted that Tom brought it tonight. Karen, you need to hear it again.

Nick listened: Girls Against Boys are another of those late-80s, early-90s names that I know of but have never heard – Tom and Rob are doing a sterling job of slowly introducing me to many of them! I really enjoyed this, the dirtiness of it, the low-key, low-slung grooves, the juxtaposition of twin basses, guitars, and muddy keys. Not quite so keen on the vocals, but I can live with them. Which I probably will be doing – this has gone on my list of records to buy in the near future.

Graham listened: Tom’s suggestion that this maybe labelled “hardcore” had me worried as not an area I’m would choose to explore. I was pleasantly relieved and in my perception I would describe this as more grungy pop. I imagine the live performances would up the octane levels though!

One thought on “Girls Against Boys – Venus Luxure No.1 Baby – Round 15: Tom’s Selection”