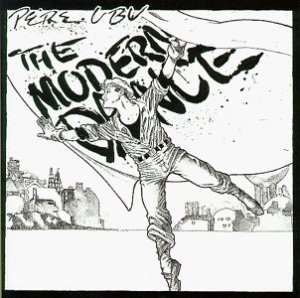 The premise: An album and a track by the same artist that has at least ten years between them. We spend a lot of time at DRC talking about artistic development over time. I thought it would be interesting to make this the focus of the meeting, to hear it rather than just talk about it.

For some reason I agonised over this selection more than any other since we’ve been meeting. I had narrowed my choice down to about four different artists and plumped for Pere Ubu in the end as their development through the late 70s and 80s is particularly interesting. However, the choice of album also led to much deliberation – should I opt for Dub Housing, the band’s mind-blowing but hugely difficult second album, or the (slightly) more immediate, straightforward pleasures (a word that can not really be used when considering Dub Housing) of the 1978 debut – The Modern Dance? Well, in the event, The Modern Dance prevailed – its hooks and more conventional sounds and structures are easier to digest in a single sitting yet it still sounds vital and innovative after nearly 35 years! How is that?

Well, I put much of it down to Beefheart. To me, a considerable proportion of the music that has dated badly over the decades has been very easy to pigeonhole, to place within a scene (think psychedelia, punk, prog-rock, glam, new romantics, shoe-gaze, Britpop, Madchester etc). Despite inevitably having a bright start, usually spearheaded by a groundbreaking album or two, as we all know it doesn’t take long for the chancers and talentless to hop aboard and before you know it much of the music that exists within a scene seems to lack soul (as in artistic integrity); the music is no longer coming from the heart but heading to the pocket. And all the detritus that the scene attracts starts to devalue the very stuff that made it so vibrant and exciting in the first place. The sounds of the scene become ubiquitous to the point of tedium so that when you go back to the source, to that cherished album that once sounded so fresh and unique, it no longer sounds like the record you once thought it was. It just sounds dated.

Anyway, getting back to Beefheart. Love him (Rob, me) or not (Nick, philistines), there is no denying that he was one of popular music’s great innovators, totally out there on his own, making music unlike any that had been made before (on the whole) and unlikely to ever be replicated. There are not, to my knowledge, many Captain Beefheart tribute bands around! Fascinatingly, not one of the scenes listed above could be said to have been remotely influenced by him and the music that he produced on the majority of his albums is pretty much impossible to categorize. It seems that those who have been influenced by Beefheart tend to inherit his ability to produce art that is timeless. It’s probably partly due to the fact that it will, by definition, be challenging music that is too difficult for your average jobbing musician out for a fast buck to appropriate. So these bands plunder a rich seam, only accessible to the talented and/or visionary.

The Modern Dance, by taking elements of Captain Beefheart’s sound and approach to making music (the yelped vocals, the unexpected twists and turns in song structure, the brevity yet complexity – we’re not talking Pink Flag era Wire here – of the songs themselves) sounds to me like it could have been made yesterday, 35 years ago…or any time in between. Because there isn’t really anything else like it. It’s an amazing record, one that gets better with each subsequent outing and one that sets a consistently high bar from the initial nails across the blackboard wake up screech of Non-Alignment Pact to the aggressive hands claps, warbly organ  and ‘It’s just a joke man’ refrain of Humor Me. I love it!

Which makes 1988’s Cloudland album so fascinating. I’ve given this record a good few chances over the years and each time I’ve gone back to it, I’ve expected to discover it wasn’t the album I thought it was. Yet, having dug it out again for DRC, it still sounds as awful as ever to my ears. The production on the album is turgid 80s rock at its worst, the songs are linear and predictable, the band sound forced and tired, the magic has gone. Although 10 years younger, Cloudland sounds dated in a way The Modern Dance (and Dub Housing for that matter) don’t and although we played Ice Cream Truck, it was a random choice (Nick selected it for us) and any one of the other tracks on the album could have been used to illustrate the fact just as effectively.

In researching the two records for the meeting, I discovered that Cloudland was the result of the record company’s desire for them to make a ‘pop’ record. It made me think of a similar situation that had occurred 14 years previously when the great visionary artist of his time tried to produce an album that was dictated by his pocket, not his heart. The album was Bluejeans and Moonbeams and the artist – Captain Beefheart!

Rob listened: As a teenager, discovering and falling for PiL, The Fall and Joy Division, Pere Ubu were always there in the background, mentioned obliquely in reviews of other bands, apparently occupying a space somewhere in the same orbit as a bunch of bands I loved. I never went there. I guess I didn’t know where to start and had no-one to tell me. Then last year when Nick guested on ‘Strangely Strange but Oddly Normal’ on Phonic FM host Mark Armitage played a Pere Ubu track on which my wife commented: “this is the sort of racket you’d like”. She was right. I liked this on it’s own merits, and also because despite its idiosyncrasies I could hear through-lines from Can and Beefheart via Talking Heads and Wire to The Fall and Sonic Youth. I suspect that ‘Dub Housing’, if it’s an unhinged as Tom suggests, might be even more up my alley.

Nick listened: This was the first week where I owned every record played at DRC, even if I’d never actually played either of the choices that Rob and Tom brought along. Pere Ubu I never played because… well, I don’t know. I picked up this, and Dub Housing, years ago on the strength of the name-check in Losing My Edge by LCD Soundsystem; I found them cheap and it seemed silly not to stockpile them for later listening. I thing I put on Dub Housing first. Maybe I was expecting King Tubby. It was enough to make me not put on The Modern Dance, even after Mark played it when I guested on his radio show. When Tom played me the whole thing, though… well, it’ll get played soon. Now’s the time.