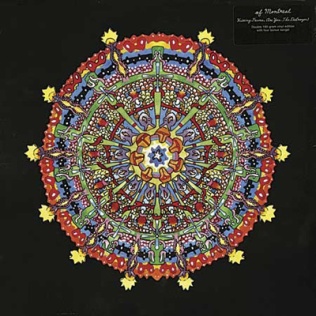 Imagine you’re watching one of those films whose opening sequence starts off with a view of a distant galaxy. The image starts to magnify and suddenly you are hurtling into an arm of the Milky Way (for it’s that galaxy), about two thirds of the way out from the galaxy’s centre. The magnification continues apace, now we’re being given a tour of the solar system, zooming past the gas giants, on through the asteroid belt and past Mars. Earth comes into view, we whizz through the atmosphere,  puncture a wispy cumulus or two to hurtle (invariably) into a suburban landscape, through an open window to focus on, perhaps, the main character of the movie. But rather than cut to the inevitable ‘get ready for school’ off camera dialogue of the protagonist’s mother, let’s continue to their record collection. The dude is an indie kid, but left field indie rather than middle-of-the-road indie and so, of course, has all the Of Montreal albums…and there they all are chronologically arranged pretty much smack bang in the middle of his alphabetically ordered albums. The camera continues to zoom in right to the heart of the Of Montreal selection, to Hissing Fauna (which is the middle album since the kid has a promo of 2016’s Innocence Reaches) and on it goes, to the centre of the album, to the gargantuan groove fuck that is The Past Is  A Grotesque Animal (track 7 out of 12), which happens to be the kid’s favourite 12 minute long existential dissection of a relationship gone bad in, like, ever. We carry on to the middle of the…I hesitate to say ‘song’ as that’s, kind of, doing it a disservice…piece, and examine the lyrics either side of the median:

‘Somehow you’ve red-rovered the gestapo circling my heart
And nothing can defeat you
No death, no ugly world

and you’re amazed that something so poignant, so devastating and poetic could reside there. It’s only later, when you check out that song/opus/monster that you realise that going to its heart and finding such eloquence is not coincidence at all – dissect any part of The Past Is A Grotesque Animal and you’ll find similar, incredible, lyricism; lyricism as exorcism perhaps, as our hero, Kevin, tries to come to terms with the disintegration of his marriage, but, hell, his loss is our gain, so let’s rejoice that his world falling apart has led to such an outpouring; an outgushing if you will!

I only own the one Of Montreal album. There may be other Grotesque Animals all over their catalogue, but I doubt it. It feels so right that this is central, not just to the album, but…to everything! Listening again just now, the twelve minutes sped by. As those of you who follow the blog will know, I’m not, by nature, a lyrics kind of guy, but these, well they’re something else! Every line is quotable in isolation (in fact one of the music forums I used to follow went through a phase where pretty much every regular poster used a different line from TPIAGA as their tagline) but together they tell the tale of a man’s suffering that is heartbreaking in its honesty and breathtaking in its eloquence.

Spiraling out from TPIAGA are all sorts of kaleidoscopic goodies, pop gems mostly, skewed pop gems almost entirely! Some run off in every direction like disorientated mice, tangential to the point of abstruseness but always clinging onto the pop wreckage that Of Montreal choose to inhabit. Others, like the closing pair of She’s A Rejecter and  We Were Born The Mutants Again With Leafling are more straightforward but no less brilliant (She’s a Rejecter features the unforgettable lyric:

‘Oh no, she’s a rejector
I must protect myself

which is (a) hilarious, (b) shocking and (c) really sad). I love these songs, but they are exist in the shadow cast by their ever looming big brother and, as such, they feel like hors d’ouevres; wonderfully tasty but appetite whetters/palette cleansers.

My eleven year old son Kit described Hissing Fauna as sounding like a cross between Bowie and Prince when I played it to him the other evening. I guess what he was hearing was the same inventiveness and creativity, someone sounding as though they are not taking themselves too seriously, enjoying the process of making music that is shot from the heart, true to the self, groundbreaking yet familiar enough to be accessible. And whilst Hissing Fauna doesn’t make it onto my turntable all that often these days (it’s almost ten years old…blimey!), I always enjoy it, especially as I get closer and closer to its epicentre!

Nick listened: Emma bought this when it came out, but it kind of got lost in the hustle and bustle of other great records from 2007, which I rate as about my favourite year for music in the last couple of decades (Battles, LCD Soundsystem, Caribou, Patrick Wolf, Spoon, Stars of the Lid, Beirut, Studio, The Field, Radiohead, MIA). it wasn’t the only casualty; I got sent a promo of Boxer by The National and shelved it without listening for years. So Hissing Fauna got listened to a couple of times without penetrating what it was doing really, and then put away, eventually ending up in a box under the spare bed with hundreds of others when we cleared the bottom shelves to toddler-proof the livingroom. But I’ve dug it out now, and it’s back in the active collection.