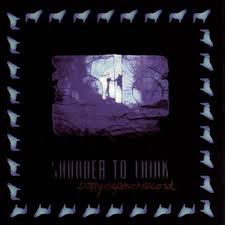 Although nine times out of ten a record played by someone else at record club is the record I would have chosen by that artist, occasionally an album has been produced that has elicited a gasp of surprise, perhaps (read as ‘hopefully’) only internally, as in, ‘you brought that one?!?’ I thought it might be ‘fun’ to put the cat well and truly amongst the pigeons and set the ‘Anything You Can Do I Can Do Better’ theme. It turned out on the night, somewhat disappointingly it has to be said, that the moggy in question had had its claws removed, its teeth blunted and its pigeon hating gene well and truly modified. It all went off without a hitch – it transpires we are a far more laid back bunch than I had previously thought and nobody really fought for their former choice.

When I went through the list of albums we have played at record club (a mind-boggling 300 or so records now), many of the records I have selected would now be replaced by something else from that artist’s catalogue. Rob was right with his rejection of Imperial Bedroom – but Trust is the keeper as far as I am concerned, not This Year’s Model. Hejira is a very fine record but I now prefer The Hissing of Summer Lawns and Court and Spark (probably the latter album would be my pick), their spellbinding complexity only becoming apparent over the course of the squillions of listens I have given them in the last couple of years. Strange Mercy was a bit of a hobson’s choice – an album of the year in a year when I bought very few albums. Actor is still St Vincent’s high water mark as far as I am concerned. I would also replace Barafundle with Spanish Dance Troupe, Knock Knock with either Supper or A River Ain’t Too Much To Love and maybe even Ekstasis with Loud City Song (although I am still getting to know the latter it sounds pretty amazing to me).

The others too have occasionally produced something other than the record I would have brought. Admittedly sometimes they have been hampered by a theme but in the case of Shudder To Think (coincidentally the same evening PJ Harvey’s Let England Shake was played) there was no such excuse. Rob was just plain wrong!

I can see why he would go for Get Your Goat as it panders to a more indie lo-fi scuzzed up aesthetic (without really being any of those things). It’s a bit more definable I suppose. Pony Express Record is a slippery fish, its modus operandi seems to be to try to meld as many genres as possible into every song, fly off at a tangent both melodically and lyrically whenever you think you’re getting a handle on things, in general to be as willful and annoying as possible. It shouldn’t work, it doesn’t really for the first ten or so listens (as Nick and Graham will no doubt confirm) and it very nearly doesn’t work at all. But somehow, and God only knows how people manage to write songs that do this, after a certain amount of work on the part of the listener, the mists clear, the sun beams through and all you can hear is one glorious hook after another after another.

And that’s why I think Pony Express Record is a notch above its slightly more accessible predecessor. But, then again, PER was my first Shudder To Think record and, having acclimatised to its bizarre structures and Craig Wedren’s preposterous singing voice and lyrics, maybe Get Your Goat just sounded a bit safer because I already knew what to expect. So maybe, just maybe (whisper it) I have been wrong all along!! Rob?

Graham listened (and for at least 20 mins was thinking “what the **** is this all about”): But sorry to disappoint Tom, because by the end I was firmly on board.  It would require many listens to fully enjoy the hugely intricate mix of hooks/riffs/structures/time changes/lyrics (and not quite sure I’m ready to submit myself to that yet) but it was all there after one listen. An amazing album.

Rob listened: First, a disclaimer. I’m going to write this without reference to my write up for ‘Get Your Goat’ which means I may be wrong when I say I brought that to just our second meeting and also that I may, in a few words time, be repeating myself when I go on about Craig Wedren having a voice like a raygun. If I didn’t say that last time, I should have.

Everything Tom said, but ‘Get Your Goat’ is better. One of the recurring themes in our discussions, sometimes explicit, often not, is the relationship between supposed ‘career peak’ records and those that lie either side of them and how both intersect with the maps of our own tastes and the geo-musicological forces that shaped them. Long may that continue. Trying to tease out of each other why we like one thing more than another is one of the great things about this club. The fact that we never quite nail any of it down is one of the great things about music, art and life. This themed-round was particularly fine in this regard. Bravo Tom.

‘Get Your Goat’ was my first Shudder To Think record. I was given it to review by an uninterested editor who saw me as the guy who liked noisy american music. He pretty much had me banged to rights. Because I had to write about it, and because at that stage I was a conscientious reviewer, I listened to it over and over and over, because I had absolutely no idea what was going on. And then, out of the conflicting vectors and topographies, shapes and relationships began to emerge until I had the measure of it. It probably took 20 or 30 listens. We’ve spoken before about records that ‘click’ and I’m generally happy to remain confused by those as once they click that seems like a puzzle solved with no need to return to it. Shudder To Think aren’t like that. Their songs are repetitive, melodic, hook-driven, poppy. It’s just that they’re working from a shattered set of rules. It just takes patience to get what they’re up to, and you’re away.

So, I love ‘Get Your Goat’ like a first love. When ‘Pony Express Record’ came along, It made sense straight away. It’s a fine, fine record and I totally get why it is considered their masterpiece, but for me it is a ramping up and honing down of what they were already doing. It’s their perfect statement and I like a little imperfection. I guess I also have to say that it is quite a lot closer to some of the Math Rock records it helped to inspire. That’s not it’s fault, but if a step towards ‘Get Your Goat’ is a step away from Tool, then i’m taking that step.

Anyway, I’ve written too much already, but let me tell you about Craig Wedren’s voice…