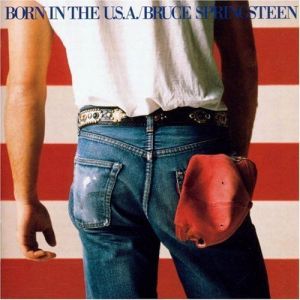 In 1973 Bruce Springsteen released ‘Greeting from Asbury Park N.J.’, his first album. The second track, ‘Growing Up’, like most of the album, overflows with florid language, clever structural gestures and Dylanesque curlicues. It’s a decent song, about growing up.

‘Born in the USA’, Springsteen’s seventh album, was released in 1984. It bears none of the lyrical pyrotechnics, none of the unashamed cleverness of ‘Asbury Park’. In its approach it is straightforward, stripped down, direct. It’s a mature record from an artist who has figured out who and what he wants to be, and is executing it. It’s most striking quality, and one which is deceptively easy to overlook, is its remarkable, poetic concision. Songs are whittled down to their essences and the characters who have always lived and breathed in Springsteen’s songs, are much more alive for it. In literature, the likes of Raymond Carver and Ernest Hemingway are held as master stylists for saying more with less. In rock and roll, by the time he reached this point, Springsteen was their equal.

‘Born In The USA’ is a lyrical, storytelling masterclass. Moving, enervating, insightful, all backed by a band giving greatly and having a heck of a time. But the best of the best is the title track, an absolutely remarkable piece of work.

I’m a late convert to Springsteen, and sometimes I feel the convert’s zeal. It’s most strong for ‘Born In The .U.S.A.’, the song which first pushed me away, like many others who just heard it on the radio and dug no further than the surface, now burns brightest. Possibly the most wilfully misunderstood rock song of all time, both by those who loved it mistakenly, thinking it was a piece of rabble-rousing patriotism, and by those who rejected it as boorish nationalism without stopping to really listen. It’s a masterpiece, pure and simple.

The song was boiled down from a long standing work in progress initially called ‘Vietnam’. Like many of the songs which would eventually appear on the album, it was written during the acoustic sessions Springsteen worked through at Colts Neck in January 1982. Many of these were released unvarnished as the ‘Nebraska’ album. The demo version, a stripped acoustic lament, can be heard on the ‘Tracks’ album. At one point this is the version Springsteen favoured releasing. In fact at one stage he pushed for the release of the whole ‘Born in the U.S.A.’ set in their acoustic demo, the same stroke he had pulled with ‘Nebraska’.

Inspired by his work with Vietnam veterans groups, Springsteen captured the alienation and, ultimately, internal rebellion, in a few perfect brushstrokes.

But the final proof that Springsteen had learned to say more with less comes in the lines he leaves out completely. When the subject matter becomes too emotionally charged, his lyrics fade into the silence of a sob. The two verses which deal with the death of the protagonists brother in Vietnam both leave gaps where there should be lines. The song is a structural masterpiece.

Still it may have joined the ranks of his other low-key pen portraits were it not for the ultimate decision to let the E Street Band go wild with it. They go off like Fourth of July fireworks, and this contrast is what makes the song, ending as it does with a cry of self-determination and defiance in the face of grinding adversity. Forgotten and abandoned by his country and without the means to escape on the huge mythic motorcycle which previous Springsteen characters could always do, our man kicks back in the only way he can, insisting on his own vitality, insisting ‘I’m a cool-rockin’ daddy in the USA now!’.

The version of the song we know was created on the fly by Springsteen and his band. It was the second and last take of the song that the band recorded. It’s extraordinary. Even just the crashing, exploding drums are enough to make it an incredible listen.

By the time we reached ‘Born in the U.S.A’. The fantastical dreamers and fighters of the early records had been dealt a dose of reality by world they met on subsequent albums. Those we met on ‘Nebraska’ crossed the line in their attempts to escape the chains. Now, on his seventh despatch from blue collar America, Springsteen’s characters were struggling but ultimately finding ways to carry on through a harsh decade, with their determination and humanity intact.

Tom Listened: In my response to Graham’s album of last year – Mark Lanagan’s Blues Funeral – I wrote that it reminded me of latter day Springsteen in that it was a collection of really good songs…and that was about all it was. No grand artistic statement. No boundary pushing sonic cathedrals. No great surprises. I should have added, ‘and what’s wrong with that?’.

But I was wrong about Springsteen anyway.

At the time I had just acquired my first Bruce album (Tunnel of Love), more by default than anything else as it always seems to be the ubiquitous Bruce album in those bargain bins in second hand record stores. At the time I hadn’t realised just how good it is. In fact, these days I find it hard to think of a side of vinyl that is more realised than side two of Tunnel of Love.

But the point that I am labouring to get to is that Springsteen, for me at least, takes a bit of work. What at first may seem like just a collection of pleasant songs, in time reveals themes, characters, and musical depth that can be easily overlooked on a first listen. Blimey – it’s only taken me nigh on 30 years to ‘get’ the song Born in the USA!

Hearing it the other night, listening to it properly…well it just sounded like a completely different song to the one I must have heard a squillion times before. Rob’s introduction helped, but that was mainly to do with the song’s lyrics and story. And it wasn’t only that – the music sounded completely different to what I was expecting too. Where as in the 80s all I could make out was the bombastic, overwhelming drumming and Bruce’s unrefined holler of voice, what I heard this time were chord changes to die for and real emotion in every word…and bloody loud drums! An epiphany!

After that, I’d be lying if I were to make out that there wasn’t a drop in intensity and awesomeness. But that’s understandable, given just how good Born in the USA is…and that I hadn’t had 30 years to acclimatise to the rest of the album. But I’m looking forwards to adding another Springsteen to my collection and hopefully I can get there with the rest of the album within the next 30 years!

Graham listened: Bruce and I have kept a respectful distance between us most of the time. I had a copy of this on release and was gushing over it at the time. Then I started feeling it was all a bit ‘redneck’ right wing and too mainstream popular. Obviously politically naive myself at the time, I rather missed some of the point! But then the big brash live shows and the video for “D in the D” pushed me further away. But years later when I listened to ‘Nebraska’, Bruce outfoxed me again. This sounded great, big, brash, energetic sound, which I can accept now is an ‘ok’ thing. But there is something still about “D in the D” that makes me wince, it’s almost the equivalent of Portishead’s Machine Gun.

Nick listened: I know I ought to give Bruce some time – so many people I respect, musicians or just fans, adore him – and I know he’s great and I know he’s on the side of the angels etcetera, but something just isn’t clicking. Or… not even that. I just don’t feel like there’s space in my head for Springsteen. Everything Rob said about this record was right, and it was clearly not the Republican chest-thumper some wanted it to be way back when, and he clearly does what he does really well… I just can’t bring myself to be interested in it particularly. But I didn’t dislike it in any way.