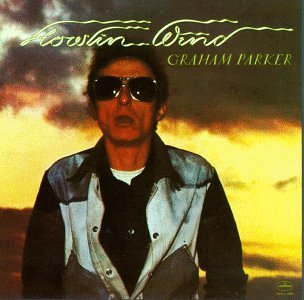 Up until recently this album has been harmlessly gathering dust in a forgotten pile (the almost prefect cue for fellow members to suggest it should go back there!). I still have no recollection of where it came from, but apart from the last few weeks, it hasn’t seen a turntable in around 30 years.

For most people, I guess Graham Parker has been resting in the equivalent of the “where are they now and who were they in the first place category”, for around 30 years now. However last few months has seen him receiving a sudden flood (in Parker terms) of coverage  via an appearance in the movie, ‘This is Forty’, along with a BBC4 documentary,  featuring a reunion with ‘the Rumour’ after 30 years apart.

In the ‘Don’t ask me questions’ (last and best track from this album) film, people like Springsteen and Black Francis queue up to sing his praises and bemoan the wider public for not recognising his talent. Moreover, Parker comes over as a genuinely nice guy, quite happy with his lot. If you can imagine Derek Smalls (the Lord of the Bass) filming a documentary of his post ‘Spinal Tap’ career, you get fairly close. Bad career moves, timing and record deals seemed to have all conspired against Parker.

Watching early footage of his performances, the tracks from this album come over as edgy, acerbic and positively dangerous for a 1976 ‘pub rocker’. Finally inspired, I dusted off the album and tried it again.

The album itself feels much mellower than his live performances and it seems the cover could be of a completely different artist than the image he seemed to project on his early ‘Old Grey Whistle Test’ performances. To take an angry young man in his mid-20s and make the album cover look like the final album by washed up 50 year old country music star, takes quite a skill. To be honest, cover art seems to have been a weakness through Parker’s career, including such low points as ‘Carp fishing on Valium’, along with his recent reunion with ‘the Rumour’, on ‘Three Chords Good’ (I think Bungle and Zippy should consult a lawyer). 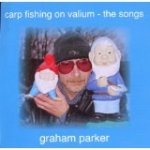 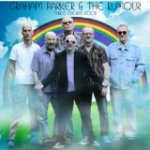 As for the album itself  listening properly was a bit of a revelation. Simply 12 good songs lumped together and trying to do nothing more than achieve that. He benefited from having an experienced band assembled for him and giving him an energetic but pretty loose, bar room sound from the off.  Some of side one borders on the thin line between joyful and twee, but side 2 signals the type of Parker sound I had been expecting from his live footage. Sounding like Costello before he had arrived on the scene, there are touches of Van Morrison along the way. In addition to ‘….Questions’, the title track and‚ ‘You got to be kidding’ stand out for me.

I’m now on to  his second album and still enjoying it after a few listens. I’ll not sure if I’ll go any further, but I’m glad I gave him a chance after all these years.

Tom Listened: Once again sacrificing his record for the dreaded ‘take away slot’, Grahams Parker and Pollock suffered a little from dinner chatter and monosodium glutamate blues. It was also about two years ago that we listened to it! Dredging the memory banks, I seem to recall an album of two halves – the angrier Elvis Costello type compositions sounding much better (punchy and vibrant) to the more workmanlike filler (?) that populated the centre of the album. I too had caught some footage of Graham Parker on one of those BBC retrospectives recently and thought he sounded worth checking out…and I guess I have now, and liking about half of what I heard I think that’s probably enough for the time being.

Mind you, if the album had a reasonable cover, one that made you think that the people releasing it cared at all about the product, I would probably be feeling differently about it – which is stupid but (sadly) true.

Nick listened: I’m gonna have to be honest and say that I can’t remember a thing about this apart from the… ahem… artwork. It was on during takeaway, and it was months ago. It did sound a bit like Elvis Costello, I suppose. I seem to remember saying on the night that if this guy had been around 15 years before he’d probably have been a behind-the-scenes dude rather than an on-the-sleeve dude.