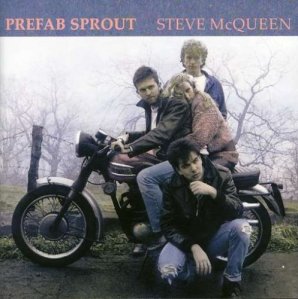 In most cases, my offerings at DRC meetings have been ‘on the list’ for many months beforehand. I don’t think my list is as organised as Nick’s or as considered as Rob’s. And I don’t think Graham really does lists. But I certainly have a mental roster of probables, possibles and definites – it’s just that, despite owning it for a couple of years now, until recently Steve McQueen didn’t feature on it at all.

I picked up Steve McQueen (not literally, that would be ridiculous, seeing as he’s dead and all) from the stall in Newton Abbot market  – a case of predetermined purchasing that I occasionally indulge in…as in, ‘I’m going to go to the stall and I’m not coming away without a record’. So I bought it because I knew it was something I should have in my collection. It was something I was supposed to like and there wasn’t anything else that was more (or, more probably, remotely) enticing! I somewhat halfheartedly played it a couple of times, out of a sense of obligation really, when I actually felt like playing something else, something new and vital (and probably nowhere near as good) but I always made sure it was when I was only half listening – probably whilst doing the hoovering or with the dishwasher whirring away – so I wouldn’t be wasting a ‘proper’ listen on something so unlikely. You see, I’ve always hated the band’s name and I’ve associated Prefab Sprout with hot dogs and jumping frogs and Albuquerque and being fey. Their sound to me was all cheesy 80s synths and cheesy 80s girlie backing vocals. The chances of me ‘getting’ Steve McQueen were minute before I even listened to a single note. To compound matters, this is not an album that rewards a casual listen. Its complex structures and melodic twists and turns can sound like a total mess with only half an ear and a tenth of a mind on the job. So it went back on the shelf to gather dust and disdain.

Until, that is, I sat down and had a proper listen. And boy, that first side just blew me away. So I played it over and over, only occasionally venturing into the more oblique, abstract musical landscape of side two. But that was fine because side one was all killer, no filler.  And then, as so often happens, side two starts to worm its way in so that eventually you can not even remotely understand what it was that was getting in the way in the first place. So now I love it all, from the opening romp of Faron Young which is so deft in the way it writhes from one passage to the next, through the plaintive soundscapes of Bonny, When Love Breaks Down and Desire As to the funk(ier) work outs such as Moving the River and Appetite and on to the final thrilling crescendo of When the Angles. And possibly the trickiest song of the lot, the bizarre and (at first listen) clunky Horsin’ Around. Well, that’s probably my current favourite. How that can be when it sounds so much like Matt Bianco is beyond me, but it charts some amazing musical territory in its four and half minutes and, like all the best songs, the realization of its brilliance is all the better for being so hard won.

On the night, Destroyer (in particular Kaputt, which is a bit of a DRC favourite) was mentioned on many occasions. The similarities are obvious and pretty much irrefutable but I have to say that whilst I think both albums are amazing, I (whisper it)  probably prefer this one…for the time being at least.

Rob listened: What a strange, smooth and slippery record this is. As a teenager in the mid 80s, already enamoured of The Smiths and following the dots to other acts, Prefab Sprout were one of the doors open to me. I never got them. Just couldn’t see the appeal at all. Thinking back, and listening now to ‘Steve McQueen’ for the first time proper, I can hear why. There’s so little for a hot-blooded young man to get hold of, and the record puts no hooks into you. How odd then to listen properly nearly 30 years later, years in which the sounds and styles of ‘Steve McQueen’ have seeped into the culture to the point where Dan Bejar can gain Album of the Year plaudits for fetishing them. Sounded great, start to finish. Still no hooks, but enough sparkle to draw me back to look at its shiny surface again.

Nick listened: I really enjoyed this, too. The opening track was like a strange, distracting curveball, an awesome groove that had nothing to do with the rest of the record, and then things settled comfortably into the smooth, jazzy-pop territory I’d expected – I read about Steve McQueen and the rest of Prefab Sprout’s oeuvre whilst ravenously devouring Kaputt last year, and they;d been on my mental list of things to investigate. So I’m very glad that Tom solved that for me, and I’ve added this to my list of things to buy, too.

As an aside, much mirth was caused by reading that The King Of Rock’n’Roll is about a musician being haunted by his one uncharacteristic jaunty novelty single becoming a massive albatross of a hit. Oh the irony.

Graham Listened: For many of the same reasons listed by Rob, I actively chose to ignore Prefab Sprout during the 80’s. They sounded too ‘ clever by half’ to me and the way that much of the music press fawned over them, added to my determination to avoid them. My resolve cannot of been that strong, as by 1988 I had bought the album which followed Steve McQueen (which has the ultimate 80’s fashion pic’ for a cover!). I still view them with some suspicion, but this is a great record and really good to hear it again.