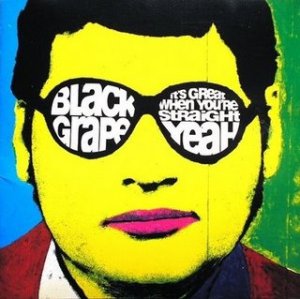 After getting in to a pattern of fairly dark and humourless offerings, I felt it was time to lighten up a bit.

While fellow members maybe justifiably stressed by my continually tardy write-ups, on this occasion the subject material has been at the root of the problem. With the mythology and history of the Happy Monday’s last album, subsequent break-up and bankruptcy of Factory Records, who would have predicted that Shaun Ryder and his new rabble would produce this? Moreover, who would resource him to produce anything? How much of this was a ‘happy accident’ and how much was well-planned collaboration?

Whatever happened, the results are great and on first listen this hits you straight away. Repeated listens may reveal a few more insights in to the quips and barbs in some of the lyrics, but the hooks in the first four tracks grab you instantly and demand your attention. Apart from drunken nightclub groovin’, the Mondays didn’t do much for me. Liked the singles, but didn’t get a whole lot more from listening to the albums.

I bought this after hearing the first single, Reverend Black Grape, and never looked back. The first four tracks on this album are so rich in hooks, grooves and humour (3 out of 4 were singles) that they draw you in to the more melancholy sound of the rest of the album. Not being part of the ‘scene’ at the time, I suspect that there may have been chemical product which when taken, synched perfectly with the dynamics of this album.

Looking back I don’t know why I never investigated the second and final album, but maybe they had ticked all the boxes with this release. In fact, I wouldn’t want to tarnish memories and the impact of this as a great ‘one-off’ and unexpected comeback album (bugger, should have saved this for when those were future theme nights!) More perhaps to do with belatedly discovering Talk Talk’s last 3 albums around this time and deciding to be less flippant with my listening.

Tom Listened: I really loved the Mondays. Bummed was one of those albums that was absolutely instrumental in developing my musical tastes beyond what I had heard on the radio. The Mondays on Bummed sounded vital and dangerous…unhinged even, but totally inspired and fearless at the same time. They ruled their ‘ghetto’ and were brim full of confidence. They operated outside the established order of things, set their own agenda and wrote blistering, often unsettling indie pop songs that you could kind of dance to. And for most indie kids at the time, ‘kind of dancing’ was about as good as it got. I trawled the back catalogue, got myself 24 Hour Party People and all the early EPs. They were all fantastic. This band were genius. What could possibly go wrong?

Well….Paul Oakenfold got his hands on them, did something unspeakable to Wrote for Luck, the ‘crossover’ became clunky, obvious, no longer insidious and subtle, Bez took the wrong drugs (actually, they all took the wrong drugs) and slowed his dancing down to a slothful lope. Something was definitely wrong. For me, Pills ‘n Thrills was confirmation of this…one of my biggest musical disappointments, it seemed to lack all the elements that made Bummed so amazing. I was convinced that if I listened to it enough it would suddenly make sense, but it never did and the follow up Yes Please seemed to back up that rather than being a crowning achievement, Pills ‘n Thrills was the beginning of the end.

So…Black Grape came along and I went along with it but there were too many echoes of Pills ‘n Thrills era Happy Mondays for me – the female backing vocals, the glossy production, the lack of real edge. I liked it well enough. Driving along in my car it made the journey go that bit quicker, but I always looked forward to I Should Coco on the other side of the tape. That was the great thing about tapes…it was a perfect way of truly finding out how you felt about an album. And when you started yearning for the other side (or even rewinding to get to it), I guess you knew.

Nick listened: I know this very well, and have done since it came out when I was 16; it soundtracked the summer after GCSEs, and the summer after that too, when people started having cars – it’s a good record in the car, in summer, with the windows rolled down. I like this more than any single Mondays album I know, which isn’t many of them, for the simple fact that this came out at that peak part of my adolescence, and the Mondays were active when I was a little kid, really.