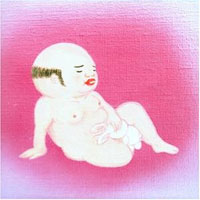 There are many reasons why I love Devon Record Club. Amongst these is the fact that it has saved me a not inconsiderable sum of money this year – instead of rushing out and obtaining the latest flash-in-the-pan, I have gone back to my record collection and rediscovered/reappraised so many treasures I have either neglected, forgotten or failed to fully appreciate in the first place. I have gained so much enjoyment through doing this that I am beginning to wonder if I need any new music at all, which is surely in direct opposition to the point of being in a record club in the first place. Oh well…whatever.

Insignificance, Eureka’s immediate successor in the Jim O’Rourke discography definitely fell into the ‘wrongly neglected’ category; an album I have always greatly enjoyed but have rarely turned to in recent years. Eureka itself has always been, at least until the last few months, one of those records that I knew I was supposed to like but never ‘got’. Insignificance is a sparkly beast, crammed to bursting with hooks, riffs, dynamism and, to my mind, some of the most interesting, hilarious, devastating lyrics in modern music. The fact that Eureka and Insignificance look like two sides of the same coin (both bearing somewhat disturbing images by Japanese artist Mimiyo Tomozawa) underline O’Rourke’s desire to subvert and discombobulate. The records sound completely different and, with the benefit of hindsight, I reckon that it was the fact that Eureka wasn’t Insignificance Part II (I know this doesn’t make sense in chronological terms but I obtained Insignificance first) that had been blinding me to its magnificence for all these years. But in recent times and with fresh ears, Eureka has begun to occupy an increasingly prominent place on my turntable, and in my heart, so that when Nick announced that our next offering had to be from 1999, I found myself favouring Eureka over another of my most treasured albums, Gorky’s Zygotic Myncci’s ‘Spanish Dance Troupe’.

What makes Eureka so great? It’s hard to distill into words but, over and above the beautiful musicianship, skillful arrangements and glittering songcraft, is an overwhelming feeling that, to O’Rourke, the listener is there to be challenged and confused.  Take the final, seemingly throwaway track, Happy Holidays. On the face of it, this is just an afterthought tagged on the end of the album, acting as a coda. But on closer listening this is surely a paean to some of O’Rourke’s influences. In under two minutes the song shifts through four phases starting out as a Jeff Buckley strumalong, transitioning through some Robert Wyatt wailing into a bar or two of Todd Rungren before signing off with something resembling Craig Wedren from Shudder to Think. Blimey!

So, is he poking fun at the genres he is inhabiting so adeptly on Eureka or is this a work of reverence? Is his gorgeous cover of Bacharach’s Something Big asking us to laugh at the original or buy the back catalogue? Is his tongue firmly in his cheek…or not? I don’t think it’s possible to work out the answers to these questions by listening the album, but I love the fact that I am being made to think about it. It’s a difficult act to pull off (interestingly tonight’s offering from Nick, The Make-Up, elicited a similar discussion) but I personally feel that in Eureka O’Rourke has made exactly the album he wanted to make before he went into the studio and that part of his intention was to create a soundscape that would force these questions to be considered by the listener. Oh…and to make some bloody great music into the bargain!

Nick Listened: Tom’s back to bringing along records that I already own to DRC, which is very nice of him, except this one I have actually listened to, and quite a bit too. I’m quite a fan of O’Rourke’s work, whether’s it’s this era of his solo career or his contributions to Sonic Youth, Wilco, and Loose Fur, especially his attention to and care for sound and mixing. Eureeka was actually one of the first albums I thought of choosing for the 1999 theme, but I decided against it. Partly I decided against it because I much prefer its slightly more energised follow-up, 2001’s Insignificance, which I’ve listened too far more often in the last few years.

Hearing this again, for the first time in a long time, was great though. I’ve always loved the beatifically repeating and surreptitiously swelling opening track, but often found that after that my mind drifts off and I lose sense of the rest of the album; I’m aware of its loveliness but not its substance or content. The record club chatter wasn’t much help at making me absorb the rest of the LP, but talkig about and engaging with the record directly definitely helped, and Eureeka struck me, 12 years on from its release, as sounding like a really influential record – the likes of Sufjan Stevens feel like they might owe a debt to its textures, balance, and atmosphere.

Graham Listened: A hat-trick of albums that I had never heard was the reward for my failing to find anything from 1999 that I wanted to bring along for a listen (though not played, there  was nearly judge’s warning issued when my copy of the Chemical Brothers 1999’s Surrender was found in the cd case of  1997’s Dig Your Own Hole!). Anyway Tom’s choice vexed me a little. I really enjoyed the variety/songwriting/arrangements etc, but on the night felt that I needed to know where Mr O’rouke was coming from. I was struggling to get whether he was being coy/amusing/ironic/playful/serious with the style and variety of the album. Clearly my problem as perhaps I should have not worried and just listened, but there seemed to be something about the album that had me questioning the artist. Should have just sat back and enjoyed I suppose?

Rob listened: Jim O’Rourke sits somewhere in the middle of my list of artists I should know something about but don’t. He flits and floats about around some of my favourite bands and records but I’ve never bothered to investigate him properly. In discussion I was surprised to find that so many people (inside and outside DRC) are so realtively heavily invested in him. I loved the record as it played (I have heard it before i the background) and ‘Women of the World’ stuck around as head music for about a week afterwards. Picking out the references and pastiches was good fun too. Most of the records the DRC have been animated by have been those where the artist’s intent is far from clear, and this worked well in that regard.