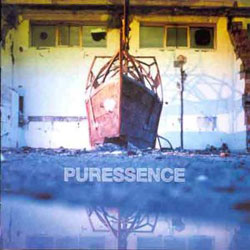 Puressence are one of my great lost bands. I’m personalising that statement because being a lost is nothing special, almost all bands are, and the ‘great’ here refers to their lost-ness rather than making a direct claim to greatness. I do think their first two albums were pretty damned great, but clearly few others agreed, hence the lostness. Is that clear?

So, i’m not claiming objective greatness for them, but it does rankle with me that this Failsworth band sank leaving few ripples when far inferior outfits are cruising the stadium circuit trading on songs without half the shine, scale and punch of this set. The alternative universe in which these guys are rocking Glastonbury and The Killers are kicking around their parents houses wondering where it all went wrong is tantalisingly close and its proximity raises interesting questions about which bands make it and why.

Puressence, the story goes, met on the coach to Spike Island and decided to form a band straight after the gig. Which is pretty cool. As this, their 1996 debut album, amply demonstrates, they had two things going for them. Firstly, they wrote songs with detail and edge and contour but which, pretty unfailingly, all harboured jet-powered hooks which still hit like rockets when they go off. Secondly, they had James Mudriczki, he had the voice of an angel and he knew how to use it and how to counterpoint it against surging rock music. It’s a great album and the follow-up, ‘Only Forever’, was even more direct and catchy.

I’m not sure how this is going to go down at DRC, especially on a night when I suspect Nick might be bringing ‘Magical Mystery Tour’ or similar. My guess is that Tom will be out, but Nick might be in, at least to the extent that he wants to talk about Embrace in relation to this. However, I wanted to bring this at some point, perhaps as an example of the sort of record that won’t make any lists and that no-one else will really remember of care about but that in another world could, perhaps should, have been the biggest selling album on the planet. And we all have one of two of those on our shelves, don’t we?

Just a wonderful song. It’s only 3m30s and two extended verses long but it manages to be both intimate and profound, bridging between a lovers’ argument and our place in the Universe effortlessly whilst transforming appropriately from a downhome country shuffle to an epic hymn and back again.

Nick listened: I used to listen to, and love, a lot of music like this when I was 16, 17, 18. I knew of Puressence, but for some reason I never investigated them. I knew the singer had an angelic voice, I knew they were serious, surging young men, probably not averse t the word epic, but they passed me by. A few months after this album was released, Embrace came along, and they were the last band of this type that I had any interest in.

Despite having never heard it, I felt like I knew the contours of this record from the get-go, the way the album started, the way it ended, the guitar sound, the moments when things stepped up into overdrive…

It may just be that I don’t listen to music like this anymore, that I feel I have no need for it, but I get the idea that no one makes music like this these days; things seem spikier, shorter, as a rule. Even the likes of Coldplay, and maybe Elbow, seem to be doing something quanitifiably different, more kitchen-sink and less standing on a mountain in the rain.

I honestly don’t know whether I enjoyed this or not.

Tom Listened: I’ve got to hand it Rob…he keeps you on your toes! I’ve known the fella for getting on a quarter of a century now and yet I had no idea he had rousing stadium rock  anthems lurking in the ‘non-loft’ section of his collection. Looking back through his 7 selections so far, it makes Deus seem like a one-trick pony in comparison….amazingly eclectic and challenging. Next week…Mariah Carey sings Big Black?

So, whilst I didn’t get Puressence (although the lead singer’s voice was mightily impressive and would have fitted a band like, say, Wild Beasts a treat….oh, hang on…), I have that nagging ‘Rob likes this so it probably is really good if you’re prepared to give in to it’ thing going on. Because, it pains me to say, he is usually right!

However, 1996 suddenly seems a long time away and records that I have recently turned
to from that era also sound pretty dated these days especially, it seems, those made by the English. As both Nick and Rob have hinted, Puressence’s sound is not easily recognisible in this age of freak-folk, Americana, African rhythms and blurred boundaries. Whilst I don’t think I’ve listened to an album of music like this before (although I did once own Queen’s It’s a Kind of Magic), Puressence didn’t manage to convince me that I had been missing out.

PS The BPB track, however, made me suspect that I have been somewhat lacking in judgement in terminating our relationship in 2003.