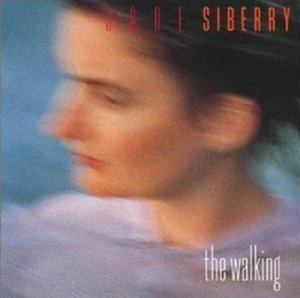 Whereas Oar (my first selection for DRC) is a record that I have gradually come round to, Jane Siberry’s The Walking was, for me, love at first listen…odd considering its reputation as a difficult album. Indeed, the Rough Guide To Rock describes The Walking as a record to file alongside Captain Beefheart’s Trout Mask Replica and Starsailor by Tim Buckley. Sometimes I wonder whether I am listening to the same record as the critics. And whilst I would probably take a difficult Beefheart album to my desert island (Lick my Decals Off Baby would be my preference), I would be packing Jane Siberry’s 1987 album before it! The Walking has just as many twists and turns, blind alleys and unexpected shifts in texture, time signature and atmosphere as Beefheart at his most tangential yet, crucially, Siberry’s album is grounded in the most beautiful hook laden pop as opposed to the raw and visceral delta blues and free form jazz of the good captain.

Thinking about my choice from last night during the day today, I am minded to draw a comparison with Joanna Newsom. I am a great admirer of some of Newsom’s work, in particular about two thirds of the Milk Eyed Mender and a similar proportion of last year’s Have One On Me. I have never really clicked with Ys and yet, of all her three albums, the song structures on it probably bear the closest resemblance to those of The Walking. Joanna Newsom seems to have adopted a remarkably similar approach to constructing a record as Jane Siberry and pop hooks are in evidence throughout Have One On Me (see Good Intentions Paving Company, ’81, Baby Birch, Go Long, Jackrabbits) along with quieter, more difficult songs that have obviously been included to provide contrast and punctuation. However, to my ears, the (necessary?) comedown tracks just do not work as well as the more accessible, pop based songs and I could happily live without No Provenance, Occident and Kingfisher. Ys is a very different beast with songs meandering along through many different phases, yet without the hook driven poppiness to anchor it, it is a long and, at times (depending on my mood), turgid listen. In contrast, the songs on The Walking are all, in essence, pop songs but these are pop songs with a difference. With the exception of the third track (Goodbye) each song has a bright and breezy melody that envelopes the song and provides just enough of a foundation for Siberry to really experiment and surprise. All the songs contain dark passages, changes in light or texture, shards of noise or whispered vocals that serve to spotlight those glorious gossamer melodies all the more, precisely because they are used briefly and within the songs themselves. Throughout the album Siberry deconstructs her songs to the point of ruin and then, just when all seems lost, when she has created a cacophony of Tilt like noise or an eerily quiet whirring sound that plays for just the right amount of time,  she will reinstate the original tune. And the magic is that it is seamless. And how she does that is something I do not understand, and that is (partly) why this in one of my absolutely favourite albums. Of all time. Ever….and it only cost $1.95!

Nick Listened: I enjoyed this an awful lot, and while I could see straight away why Tom was incongruent regarding its comparison to the likes of Beefheart, the eccentricity of the compositions would, as we discussed in relation to Bohemian Rhapsody and Scott Walker, perhaps make it a little too leftfield for some. I was reminded very strongly of Kate Bush, but if anything even more out there. The occasional whirls into near-cacophony were always tempered by moments of extremely pretty melody, and my aesthetic tastes are at a point where mid-80s gated drums and grandiose sweeps of artificial synth strings don’t offend me like they used to. If I was to have any misgivings about this album by Siberry, it would be that the whole package, front-to-back, might be too rich, to luxurious, in both texture and melody and eccentricity, to take in often or in completion.