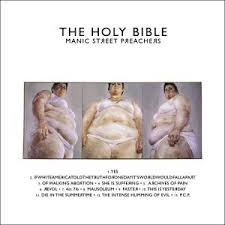 The  choices were limited in my collection with the countries remaining, however an impromptu rendition of Catatonia’s Road Rage by a fellow member at the weekend inspired me to reconsider Wales.

I began my introduction to the album with a query over whether I would be playing this to, or inflicting it upon, fellow members. The album cover and track titles indicate that it may not be a “lightweight”, but is it empty pomposity?

Anyway, I admit to being confused about the Manic’s at their beginning, not knowing whether they were glam/punk/post-punk/hard rock. Certainly their apparent self-importance irritated many in the press and kept me from taking them too seriously. However the singles from the first 2 albums and the more favourable reviews of this album caught my attention and I invested.

Leaving aside a couple of the more radio friendly tracks (Yes, Faster – and even they remain interesting) this is a dark experience, with styles being explored which I never expected from a band who while political, seemed to me to be on the road to “rockin-out”.

It takes a good few listens to fully set aside some of the preconceptions expected from the first 2 albums but it’s a worthwhile experience. The chaos of Richey Edward’s life and health are well documented and the lyrics he contributes reflect this. There are delicate moments where you might least expect (listen to 4st 7lbs).

What makes this album more interesting to me is the leap from here to the more educated anthemic sound of Everything Must Go. There are some hints on this record with some guitar riffs and solos that briefly begin to head in that direction. In fact if some of the tracks would be enhanced by less solo twiddling and more development of the sound-scapes (is that a word?) that were created. Dark, moody, gritty and aggressive are the best words I can find to describe the feel of the album and anything more sophisticated in descriptive terms would seem superfluous. I can only point to influences (maybe darker moments of the Skids/Clash/Joy Division from my collection) and can’t really identify a “this sounds like”, from the same time period.

I’m not sure how much “welshness” is communicated by this album as anorexia, fascism, Marxism, class war, ethnic cleansing etc., etc….. seemed to transcend national borders the last time I checked. A quick check on the wiki page http://en.wikipedia.org/wiki/The_Holy_Bible_(album), does confirm my suspicions that the performance of Faster on TOTP (Top of the Pops for young-uns) did lead to a record number of viewer complaints as a result of Bradfield’s black balaclava. http://www.youtube.com/watch?v=3hMqpR9AogI . Surely that alone deserves the album being given an open minded listen?

Rob listened: I’m afraid an open-minded listen wasn’t possible for me. I spent much of the length of this record trying, and largely failing, to express my once lurid but now fading disdain for the Manic Street Preachers. I won’t try to crystallise it here as I couldn’t manage it in 50 minutes on the night. Suffice to say I hated their empty spray-paint posturing when they started out, I never liked any of their records, progressing from bland punk-u-like to bland anthem-rock, and I could never understand why so many people seemed to think they were worth spending time on, although as it happens, it seems like Nicky Wire is probably a nice chap to spend an evening down the pub with. But that’s the point of this Club. I know this is a well-regarded record and I would never have heard it had Graham not brought it along and had the good grace to explain why he liked it whilst I whined without focus. I’m glad he did. I still didn’t like it. I’ve been mentally boycotting them since the early 90s and my mind has been determinedly closed to them ever since.

Tom Listened: Unlike Rob I am pretty ambivalent about The Manics; having really disliked their early posturing and empty rhetoric, I slowly came round to them and on a trip to the French Alps with some of my students in 1996 I warmed enough to the powerful, if somewhat unsubtle, sloganeering of Everything Must Go that I purchased it on my return, listened to it a lot that Summer and have barely played it since. Interestingly for me, the bits of The Holy Bible I liked least were the bits that sounded most like A Design For Life…the straightforwardness of EMG may have contributed to its (relatively) huge success, but makes for a much less interesting record than The Holy Bible and it felt a shame that some of the songs on THB often seemed to lead into a disappointingly predictable chorus or middle eight just as they were developing into something really interesting. At times the album sounded not unlike some of Rob’s more ‘out there’ offerings, I just wish the Manics had had the bottle to produce the consistently radical record that The Holy Bible so frequently suggests was there for the taking.

Nick listened: I’m also pretty ambivalent regarding the Manics; many of my friends adored them when I was 14/15/16, which is around the time of this album’s release and Richey’s subsequent vanishing, so I heard The Holy Bible, and was eulogised to about its intensity, trauma, and really deep and meaningful lyrics, man, at great length. And I quite liked it; not enough to ever buy it or invest in the philosophy and aesthetic offered up by its creators, but enough to think of Yes and Faster as great songs (if not quite as good, perhaps, as the sublime Motorcycle Emptiness and La Tristessa Durerra from their previous records), and the album as being a worthy whole. Their subsequent career has held little or no interest for me, and, as I said on the night, I think this is largely down to James Dean Bradfield’s identikit rock guitarist style and rock vocalist voice – songs on THB threaten to go down fascinating, dark alleys only to suddenly u-turn into brief foot-on-the-monitor moments of stadium rock celebration. It’s a really interesting trick, but not one that holds all that much appeal for me – it’s almost like the opposite manoeuvre to that pulled by The Boo Radleys or Super Furry Animals, who threaten cheesey pop gratification only to go weird on you at the last minute. Still, I’ve not heard this in probably 15 years, and it was a worthwhile revisit.