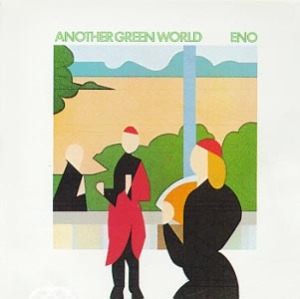 Knowing that Rob has never knowingly listened to Eno, and being more than a little interested in the pioneering producer (we share a birthday in addition to many attitudes regarding music, and as well as many of his records I also have a number of his iPhone generative music apps, and own a set of Oblique Strategy cards), I was always going to choose one of his records to play at Devon record Club, and it was pretty much always going to be this one (as it’s my favourite). The question was only ever when. Rob’s own house, given that he’s never heard Eno before, seemed to be the obvious choice. So there we are.

I first heard Another Green World while studying at university, and I’ve owned three copies over the years since; that original CD issue, plus the new remaster from about six years ago, and also a 12” LP copy, which I keep framed on a wall. Although me saying of a record “that’s one of my favourite records ever” has become something of a comedy catch-phrase at Devon Record Club, in the case of Another Green World it is absolutely true: I don’t know what the other 49 would be, specifically, but if I was forced to take 50 record with me to a desert island or suchlike, this one is coming with me.

Literally, though, Another Green World does bridge the gap between rock and ambient, being made up of five vocal tracks and nine instrumental ones, the two types of song sequenced relatively evenly across the course of the album (unlike, say, Bowie’s Heroes or Low, which both group the ambient tracks together on side two).

It starts judderingly, with the quasi-funky motions (courtesy in part due to Phil Collins, who may be an odious twat, but who sure can play the drums) and elongated, timeless textures of Sky Saw, and the album slowly becomes more and more gentle from thereon in. The lyrics, when they’re present, mean nothing, and are sung with Eno’s typical flat intonation; Another Green World is almost entirely about the textures, the motions, the architectures: I find the slow, simple chord progressions of and layered sonic materials of The Big Ship almost unbearably moving.

Most of the time I can’t discern guitars from synthesizers from pianos from “electric elements” from “unnatural sounds” from “organ and tape” from “treated rhythm generator” (all of which and more are listed in the sleeve as being played), but the individual elements are not the point here; Another Green World’s genius is in how the components combine, interact, and alter each other through context. Tellingly I have never, as far as I can remember, listened to Another Green World on headphones; I always play it in full, in order, via speakers, whether I’m busy being occupied with other things or trying to concentrate on the album alone.

Interestingly I learnt from Geeta’s book that Another Green World was recorded in a rush, under pressure, with no songs (save I’ll Come Running) prepared in advance, and largely took shape in post-production, as it were, with Eno editing together disparate performances and ideas in a similar manner to Miles Davis’ In A Silent Way and Talk Talk’s Spirit Of Eden, another two of my favourite records ever.

Tom listened: I only own two Brian Eno records – Here Come the Warm Jets and Music For Airports – and they are so different that it is difficult to believe that they have been made by the same artist. Another Green World has been one of my ‘most wanted’ for a long time now but, as a vinyl junkie, my searching has always ended in disappointment. One of the aspects of this record that I found most fascinating (other than the fact that it is totally and utterly marvelous) is that it enables the listener to see the route from Eno’s initial ‘glam punk’ eclecticism to his late 70s minimalist ambient stuff. Rob and I were amazed by the production on this record; to think that this album was released at a time when Mud, The Sweet, The Nolan Sisters, The Bay City Rollers, Brotherhood of Man et al were producing such drivel and yet 35 years on, it sounds as though it could have been released yesterday. An essential record, methinks by one of rock music’s few geniuses.

Rob listened: PiL, The Smiths, Joy Division, The Fall. They got me aged 15 and told me, directly or otherwise, that if it was pre-1976 and it wasn’t the Velvet Underground or the Stooges, then I shouldn’t be listening to it. I obeyed, and even this far down the line I reckon the artists who have genuinely breached that particular line in the sand are countable on one hand (Beefheart, Dylan, Nick Drake, Stevie Wonder… erm… I own ‘Solid Air’ and ‘Astral Weeks’?). If I have to go back and get acquainted with Eno, who’s going to listen to that Archers of Loaf b-sides compilation?

Still, ‘Another Green World’ was full of very pleasant surprises. I expected floating ambience, but instead got sharp, crisp, clever electronic rock music that sounded both timeless and clearly directly influential on much of the stuff we’ve been listening to since its release. I’d buy it, but there’s a Death By Milkfloat double live album out next week.

5 thoughts on “Brian Eno – Another Green World – Round 6: Nick’s choice”